The Strings of the Violin 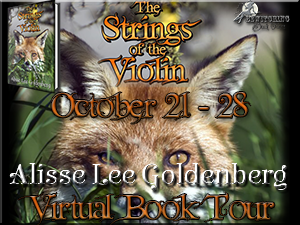 Seventeen-year-old Carrie is lying in her backyard ignoring all the looming responsibilities in her life, when a fox makes a mad dash across the grass in front of her. After she manages to keep her dog from attacking the frightened animal, the fox turns to Carrie and seems to bow in gratitude before he disappears into the bushes. All Carrie knows in that moment is that something has unexpectedly changed in her life.

Carrie has been best friends with Lindsay Smith and Rebecca Campbell for years. During a summer when they should focus on choosing colleges, the girls suddenly find themselves swept away on the adventure of their lives.


The fox reappears three days later and reveals to Carrie that he is Adom, emissary to the king of Hadariah. With his land of music and magic in peril, Adom has been sent to seek help from Carrie and her friends. In the blink of an eye, the three teenage girls go from living an average suburban life to being the champions of a world where they must contend with giants, witches, and magical beings. Will they ever make it home once more?


Carrie Eisen lay in the grass, knees bent, a sweatshirt pillowed under her head. The sun felt warm on her body as she drifted off to sleep. She had gone outside intending to read the new fantasy novel she had bought. She had read a few chapters and put it aside, just soaking up the sun. In the backyard, her cocker spaniel, Finnigan, was hunting flies. So far, he had caught none. But he refused to give up, leaping about in the grass and futilely pouncing on the buzzing insects.


There was one month left in summer vacation, and come September, Carrie would start the twelfth grade. This was something she did not want to think about until it was absolutely necessary. To her, her final year of high school meant she would ultimately have to make decisions about her future, decide a path, and begin to grow up -- something she dreaded with all her heart and soul. She wished she could just run away and have an adventure like the characters in the books she loved.


Already her parents were on her case, encouraging her to research universities and pick out programs she liked. She was finding the entire thing overwhelming. At the age of seventeen, how was she supposed to decide these things? It was hard enough some days to figure out what she wanted to eat for breakfast. But they were pressuring her to start now. She would have to do her applications this year. Her mind swam with choices and questions. What if she was rejected from the programs she wanted? What if a school looked good on paper but was horrible when she actually got there? She knew she could always change her mind, but it might mean a wasted year. And what were her friends doing? She knew they were as confused as she was, and Carrie was thankful she was not alone. She dreaded going to a large university and knowing no one. She had this vision in her head of being a lost first-year student dwarfed by a cold and massive campus. She did not want this but feared it was inevitable.


Carrie was a tiny girl in all respects, except her eyes. She had huge green-blue eyes that seemed to take up a full third of her heart-shaped face. They peered out from behind a sandy fringe of bangs, always drinking in every aspect of her surroundings. She wore her hair in a shaggy pixie cut that she never let get any longer than chin length, but it was constantly out of control.


She had been lying in her backyard for over an hour. The idea of just being lazy and ignoring all responsibility had appealed to her, and she had indulged this whim with a vengeance. Barefoot, in a pair of raggedy cutoff jean shorts and an old T-shirt, Carrie had run outside and flung herself out onto the grass, prepared not to move until she absolutely had to. Finnigan had followed, leaping at her ankles, begging to play, but Carrie had turned away, resolving not to use a single ounce of energy on anything other than soaking up the sun on that hot summer’s day.


Now, after some time had passed, Carrie lay contented, her mind deliciously blank. She heard, as if through a fog, the barking of her dog and the buzzing of the flies. She could hear the happy panting as Finnigan occasionally walked up to her and left a present of an unfortunate insect. Silently, a new sensation crept over her body. Her blue eyes flew open, and she glanced around. Despite the sun’s warmth, Carrie felt goose bumps prickling up and down her skin. She felt a distinct feeling that someone, somewhere, was watching her. She sat up and quickly spotted Finnigan. She opened her mouth to call to her dog but could not find the voice to do it. The words caught in her throat. Finnigan was standing and staring at a small bush that grew in a corner of the yard. He was growling, a low rumble that Carrie could feel vibrating in the air around her. The guttural sound caused the hairs to stand up along the nape of her neck.


“Finn?” Carrie managed to get out. She could not believe how hoarse her voice sounded. Her pet’s behavior was giving her the creeps. “Finn, what is it?”


Upon hearing his name, Finnigan turned to Carrie and cocked his head to the side, as if asking if she saw what he did in the bush. When he got no answer, he turned back and continued to stare fixedly.


Carrie squinted at the leaves, wondering what it was that had so enthralled him and so spooked her. She peered intently and let out a small gasp when she spotted two coal-black eyes staring right back at her.


Carrie scrambled to her feet, never taking her eyes off the bush. A black, button nose appeared below the eyes. A long red snout. Two large ears, a face, a small body. Carrie made a grab for Finnigan as the fox sauntered out from within the branches.


“Oh no,” Carrie breathed. She knew not to make any sudden movements around a wild animal. Unfortunately, Finnigan did not seem aware of this bit of advice, and he lunged at the fox. He snarled, gnashing his teeth at this creature who dared to invade his yard.


Carrie let out a cry of alarm as her dog escaped her. “Finnigan!” she yelled and propelled herself forward as dog and fox made a mad dash across the lawn. Carrie ran, her bare feet skidding across the ground, arms reaching, desperate to get a hold of her pet. Finnigan leapt ahead, just out of reach.


The fox ran at the head of the chaseeither bolder than Carrie had first thought or spurred on by fear. Finnigan was merely a few steps behind him. Carrie made a leap for the spaniel and just missed him, falling face-first on the grass, staining her shirt and chin green. She quickly picked herself back up and tried to cut the animals off from a different angle, but again she was unsuccessful. Her mind filled with frightening ideas about what would happen if the fox turned on her dog. What if it was rabid? What if it bit Finnigan? A whole list of horrible scenarios filled her mind. She was panicking, not just for her dog but for the fox as well. She did not know what would happen if Finnigan got a hold of the animal. There was always a chance that he was not chasing it to play, but to hunt and hurt.


Carrie tried again to make a grab for Finnigan. This time she managed to get a hold of him, eliciting a yelp of surprise. He tried to bolt out of her arms, upset at the indignity of being kept from his prey. She held on for dear life as he squirmed and struggled to get back to the chase. She held tighter, and he finally gave up, panting against her chest.


Carrie stood and surveyed the yard, trying to see where the fox had gone. She finally spotted him sitting calmly by the same bush from which he had first emerged. He peered back at her with intelligent, thoughtful, almost curious black eyes, his red fur stark against the green of the bush. Carrie could not understand how he could have hidden so successfully inside it. The fox looked directly at her, bowed his head low in what seemed a gesture of gratitude, and disappeared the same way he had come.


Carrie sat down on the grass and stared long and hard at the bush. Had that fox somehow thanked her? What had just happened? All she knew was that something had changed. The air around her was uncommonly still. She stood up on legs that seemed to be made of jelly, hugged Finnigan to her, and was rewarded with a lick. Then she turned and entered the house, her day of laziness forgotten.


Alisse Lee Goldenberg is an author of Horror and Young Adult fantasy fiction. She has her Bachelors of Education and a Fine Arts degree, and has studied fantasy and folk lore since she was a child. Alisse lives in Toronto with her husband Brian, their triplets Joseph, Phillip, and Hailey, and their rambunctious Goldendoodle Sebastian.