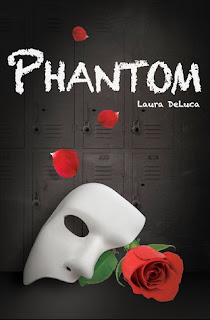 Rebecca Hope has looked death in the face twice and lived to tell her tale.
She and the love of her life, Justyn Patko, land a summer internship at a local dinner theater, performing the musical Hyde. While they are excited about their first paid acting gig, they soon find themselves surrounded by more experienced cast mates, jealous of their success. As if the tension isn’t bad enough, they soon discover that the business might be a front for something much more sinister.
When Justyn is accused of a crime that she knows he would never commit, Rebecca must decide if she wants to follow her head or her heart. While trying to prove his innocence, she makes a shocking discovery of her own.

Everyone has something to conceal in the grand finale of the Dark Musicals Trilogy. Rebecca has to look beyond the façade to discover the true Hyde or face her final curtain call. 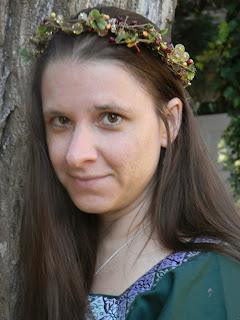 Author Bio:
Laura “Luna” DeLuca lives at the beautiful Jersey shore with her husband and four children. She loves writing in the young adult genre because it keeps her young at heart. In addition to writing fiction, Laura is also the editor of a popular review blog called New Age Mama. She is an active member of her local pagan community, and has been studying Wicca for close to eight years. Her current works include Destiny, Destiny Unveiled, Phantom, Morrigan, Player and Demon. She also has short stories featured in two anthologies called HerStory and A Celtic Tapestry.
Website | Facebook | Twitter | GoodReads | Pinterest
Laura would love if you all could post the buy links to her other books in the series. Here are the links to each one. I have also attached pics for those as well :)
Purchase Phantom
Amazon * Smashwords * Barnes & Noble
Purchase Demon
Amazon * Smashwords * Barnes & Noble

They found the rest of the Hyde cast waiting beside the stage. The parts had already been assigned, and Justyn and Rebecca had spent most of the spring trying to memorize their lines in between Phantom performances and studying for finals. Justyn had even grown his hair out for the dual role of Henry Jekyll and Edward Hyde. They had their parts down cold, but this was the first time they’d be practicing with the rest of the troupe. In fact, it was the first time they were meeting the cast at all. Fernando set about making the introductions while Rebecca shuffled her feet from side to side and fiddled with the ammonite necklace Justyn had given her. She wasn’t sure why, but she had the distinct feeling more than one of her future co-workers were giving her the once-over, and their expressions definitely weren’t friendly. The flickering lights above the stage only made their faces look more sinister.


“Hello, everyone!” Fernando began, “I’m so excited to finally introduce you all to Justyn and Rebecca, the future Broadway stars I told you about. They will, of course, be playing the lead roles of Dr. Jekyll and his fiancée Emma.”


Already a few people huffed and rolled their eyes. Rebecca wasn’t sure if it was for their benefit or simply because of Fernando’s over exuberance. Rebecca and her friends nodded to the crowd and got a few brief waves in response, but also a few nasty scowls. In particular, there was one dark-haired guy wearing a wife-beater, revealing the torso of a Greek God. He looked like he would be more at home in the mob than on the stage. A fedora certainly wouldn’t have appeared out of place on top of his kinky curls, and he was glaring at Justyn as though he were planning his next hit. A gorgeous blonde with her curly hair pulled back in a tight ponytail was sitting on the edge of the stage beside him, filing her nails and looking thoroughly bored with the whole affair. Toward the back of the set, a few younger cast members were already doing warm-up stretches. Rebecca assumed they were part of the chorus line Carmen would be joining.


“I’d also like everyone to say hello to Tom and Carmen,” Fernando continued. “Tom will be playing the role of Dr. Jekyll’s friend and attorney John.”


“Whaz up, everybody?” Tom said with a cheerful wave. “How’s it going?”


The guy in the wife-beater snorted. “Looks like that kid should be hanging ten instead of hanging out on a professional stage.”


“Now, Steve, we talked about this already,” Fernando said, annoyed. “You’re one of my best actors, and you’ll be the star again come September for our fall show. But you know I wanted to try my hand at a musical at least once before I retired, and these kids have the voices to help me pull it off.”


Steve was still glowering, and Tom didn’t look very happy either, but Fernando had already moved on with the introductions. He came to a pretty girl who looked to be in her mid-twenties. She was sitting Indian style on the stage but rose to shake their hands as they approached. Her thick hair was so long it reached the small of her back, and the ebony waves surrounded a heart-shaped face with a dark tint that declared an ethnic descent. She gave them a small smile, but her deep brown eyes seemed melancholy. Even before he announced it, Rebecca already figured out what role she had acquired. She was the perfect choice to play the sulky prostitute who falls in love with Dr. Jekyll, only to die at the hands of a jealous Hyde.


“This is Victoria Diaz. Victoria will be playing Lucy,” Fernando told them, confirming her guess. “The ummm … lady of the night.”


Rebecca was smiling and shaking Victoria’s hand when again there was an odd crackling sound. The lights above them blinked and sputtered one last time before very abruptly going out altogether. There weren’t many windows in the dining area and the ones that were there were covered in blinds. The room was suddenly plunged into almost complete darkness, with the exception of the glowing exit signs. Rebecca couldn’t help but reach for Justyn’s arm as her eyes tried to adjust to the shadows. She felt a sudden panic rising in her chest, but it wasn’t 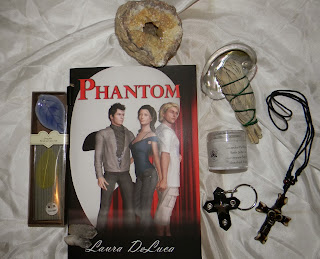