The ‘reveal’ scene of this whodunit is very slick, and it was enjoyable to see the people who thought they would get away with greed and murder brought to justice.
~Back Porchervations 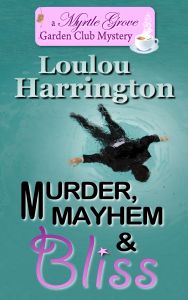 Nothing much happens in Myrtle Grove, Oklahoma. So when prominent businessman Harry Kerr is discovered face down in his pool shortly after dawn, the breakfast crowd in Jesse Camden’s tea room is buzzing. Recognizing the name, Jesse hurries to her friend Vivian Windsor, Myrtle Grove’s resident oil heiress and great-aunt to Bliss Kerr, widow of the deceased and soon-to-be prime suspect in his suspicious death.
Clearing Bliss and finding the real murderer isn’t what Jesse meant when she offered her assistance. And wrangling an eager band of helpers while chasing a tangle of leads across the countryside, tripping over deputies and evidence along the way, isn’t her first choice for her weekend. But here she is, and here she will be, hearing secrets no one should know, and discovering betrayals no one could live with, until Jesse finds her way through the maze of deceit to uncover the real killer. 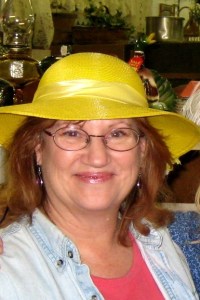 A lifelong fan of mysteries and the cozy genre, in particular, Loulou Harrington began her published career in romances and is now happy to be writing what she has always loved to read—a good, old-fashioned mystery. Even better, she has the chance to incorporate her personal love of gardening, cooking, exploring quaint villages and wandering through the great outdoors in her new Myrtle Grove Garden Club mystery series. She sincerely hopes you will enjoy sharing this special world with her.
Loulou Harrington, Author
Myrtle Grove Garden Club mysteries
MURDER, MAYHEM AND BLISS, Book 1
http://www.loulouharrington.com/
Author Links
Blog: http://myrtlegrovemornings.wordpress.com/
or: http://loulouwritescozy.wordpress.com/
Facebook: https://www.facebook.com/loulou.harrington
Twitter: https://twitter.com/loulouwrites1
Purchase Links:
Amazon 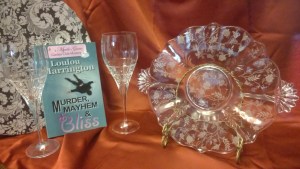 
3 Partners in Shopping, have been ill for a few weeks. Thank you so much for being with us today!

First, I would like to say how happy I am to be here today on 3 Partners in Shopping; Nana, Mommy & Sissy, too! Thank you so much for having me here. And to all the readers of this blog, thank you for taking time out of your day to spend a little of it with me.


Be sure to sign up for the weeklong Gift Box Giveaway with a beautiful, vintage cake plate, crystal stemware, chocolates and a scrumptious cake recipe just for Valentine’s Day! Oh, and an autographed print copy of MURDER, MAYHEM AND BLISS.


And, that said—I have a theory that if you want to have fun writing (and I do), it’s a good idea to include a lot of things that you, the writer, happen to enjoy in the books that you’re writing. One of the first things I really like is a good mystery, and I hope my Myrtle Grove Garden Club mystery series provides that. But what I’m really talking about today is SHOPPING.


That’s right, shopping and bargain hunting and learning to spot hidden gems. And for me that means antiques, vintage and furniture I can fix up and give new life to. There is nothing I would rather do of an afternoon than to wander through an antique shop or a flea market looking for that special piece that’s perfect just the way it is, or the one that only needs some imagination and maybe some light blue paint to turn it into a showstopper.


There are tons of wonderful things out there just waiting to be discovered. I’ve been collecting vintage china, porcelain, crystal and furniture for years. And I don’t set my things on a shelf and just look at them once I bring them home. I have my coffee or tea in a different china cup and saucer each day, and they are all 75-100 years old, but that doesn’t stop me from using them.


Of course, they’re not exactly microwaveable, and I do clean them by hand. But they were originally made to be used. And the ones I like the most are the ones where the gold trim on the handle is worn from where someone’s thumb has rested from new bride to old age. These things were a cherished part of someone’s life long before I found them. And now they are mine to use, to care for, and someday to pass on.


In MURDER, MAYHEM AND BLISS, Jesse Camden co-owns a tea room where the meals are served on vintage china and the recipes are family hand-me-downs. She also co-owns an antique shop specializing in estate sale items rescued from farmsteads that are being sold off by the younger generations.


That’s where Jesse and the ladies of the Myrtle Grove Garden Club step in. They’ve learned the value of friendship, and they know that things don’t have to be perfect to be worth saving. I don’t get to talk about antiques nearly enough in my books, because there’s always a mystery to solve and someone who needs to be rescued. But that’s okay. Because friendship’s pretty valuable, too, and that’s something else I’m learning to appreciate with the passing years.