Dying Before “I Do”
by Judy Fitzwater

There are a lot (a LOT) of interwoven character relationships in Dying Before “I Do”, and by that I mean people who have personal and/or professional pasts with each other. It adds subtle yet rich layers to the story (think filo dough in baklava – my favorite!), and are introduced at a rate that with enough support that they keep the story flow going.
~Back Porchervations 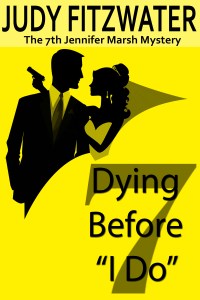 Dying Before “I Do”
(The Jennifer Marsh Mysteries Book 7)


The challenge for anyone writing a mystery series is keeping it fresh while still delivering the characters loyal readers have grown to know and love. Yes, characters develop and reveal more and more about themselves with each book, but their core personalities must remain pretty much the same. If they don't, the author risks the readers falling out of love with them.


So how does an author keep a series the same while offering a new experience to the reader in each book? Excellent question and one we writers wrestle with. Having a mystery as a main plot line has helped tremendously because I've been able to bring an entirely new situation for my sleuth, Jennifer Marsh, to deal with in each book. Each has its own theme, its own dangerous situations, its own unique characters at its core.


The latest in the series, DYING BEFORE "I DO", however, presented a different challenge. It's the culmination of the romantic relationship between Jennifer and Sam that started in the first book of the series, DYING TO GET PUBLISHED. While this seventh book stands well on its own, it was a challenge to get this romance settled. These two characters, as imperfect as each of them may be, are perfect for one another. And they are destined to be married.


In my books I always have one main plot—the mystery—and one or more subplots in addition to continuing to develop the romantic relationship of my main characters. In DYING BEFORE "I DO", the romantic plot is as important as the main mystery plot, so it has a slightly different structure. A reporter has been killed, one of Sam's mentors. To the police, the death looks like the result of natural causes. So Jennifer and Sam must work together to uncover who exactly killed Carmichael at the same time they're making plans to finally commit to one another. Jennifer is committed to solving this murder because she is finally totally committed to Sam.


I could have taken the clichéd way out by tying the mystery to the wedding. I could have had the minister die during the ceremony, one of the wedding guests keel over from poison, or have a gun wielding intruder show up to stop the ceremony. But that's not the path I wanted to take. It's been done way too many times, and, besides, that sort of story wouldn't have been a "Jennifer" story. No, this storyline had to have some mystery important to Sam in such a way that, as they solve it, he and Jennifer become a real team in what will be their new life together. Their solving of the case finally cements them as a couple with common goals and a common life.


As I write more books in this series, I'll have the fun of exploring the marriage of two people who don't always understand one another and who often get on each other's nerves. I can't promise happily ever after, but I can promise happily adventurous fun as these two sleuths tackle future crimes. It will be every bit as much an adventure for me as their writer as it will be for them as characters. I hope you'll come along to see how married life works out for Jennifer and Sam and what mysteries will arise to complicate it.

Synopsis:
Love and murder: two words that should never go together. But when Jennifer and long-time beau Sam Culpepper finally decide to tie the knot, murder rears its ugly head to intervene. Now Jennifer has more to contend with than choosing colors and flowers for the most important day of her life. She and Sam must thwart whoever is bent on keeping the secrets of an old kidnapping case. One man is dead, and young reporter Teague McAfee is next in line. Jennifer finds herself embroiled in a twisty tale of love gone wrong, while dodging her friends who are determined to give Jennifer and Sam the perfect wedding. 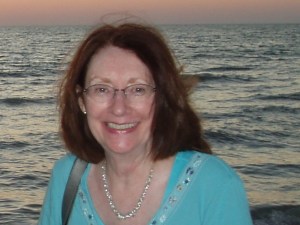 About This Author
Judy Fitzwater is excited to have recently published the 7th book in her popular Jennifer Marsh Mystery Series–DYING BEFORE “I DO”! She has also just released THE ROCKY ROAD TO PUBLISHING: ADVICE ON WRITING, a fun, insider’s look at the world of writing and what it takes to be successful.
Judy grew up an Air Force brat and has lived in nine states, including Maine and Hawaii. Her first published mystery, DYING TO GET PUBLISHED, was plucked from a stack of unsolicited manuscripts at Ballantine Books. It was nominated for an Agatha Award for Best First Mystery. The subsequent seven-book series, The Jennifer Marsh Mysteries, was a delight for her to write, especially the scenes with Jennifer’s quirky writers’ group. All seven are now available in Kindle editions. Judy’s suspense thriller, DROWNING IN AIR, is now in paperback, as well as a Kindle edition! And don’t miss her very funny romantic comedy, VACATIONING WITH THE DEAD, which is filled with ghosts and mayhem. She has plans for more mystery, suspense, humor, and paranormal adventures.
Author Links:
Website: http://www.judyfitzwater.com/
Facebook:  https://www.facebook.com/judyfitzwaterauthor?ref=hl
Goodreads:  https://www.goodreads.com/author/show/699464.Judy_Fitzwater
Purchase Link
Amazon