How to Plan a Wedding for a Royal Spy


Whether as spies or lovers, the Renegade Royals—illegitimate sons of England’s Royal Princes—are bold, skillful, and a force to be reckoned with…


A war hero returned from Waterloo should be able to indulge in a bit of bad behavior. Instead, Captain William Endicott is summoned by his father, the Duke of York, to investigate an assassination plot. The unlikely suspect: William’s former sweetheart. Will can’t believe that innocent Evie Whitney could be mixed up in anything so nefarious. Then again, almost everything about Evie has changed—except for his body’s instinctive response to hers…


Just as Evie’s life is finally coming together, Will saunters back into it. Should she slap him—or seduce him? Even as she tries to decide, scandal pushes her toward marriage with a man she can neither trust nor resist—and into the heart of a deadly conspiracy… 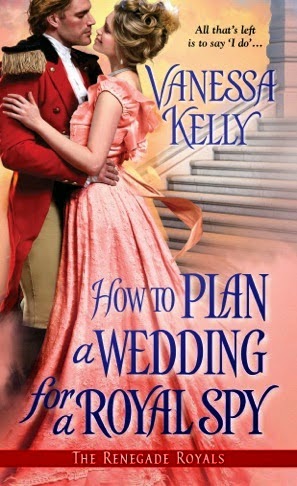 
Vanessa Kelly is an award-winning author who was named by Booklist, the review journal of the American Library Association, as one of the “New Stars of Historical Romance.” Her Regency-set historical romances have been nominated for awards in a number of contests, and her second book, Sex and The Single Earl, won the prestigious Maggie Medallion for Best Historical Romance. Her current series, The Renegade Royals is a national bestseller. Vanessa also writes USA Today bestselling contemporary romance with her husband, under the pen name of VK Sykes.

Rafflecopter Giveaway (Grand Prize of a $20 Amazon or Barnes Gift Card and 4 Runners Up will receive print copies of SECRETS FOR SEDUCING A ROYAL BODYGUARD and MY FAVORITE COUNTESS.)

a Rafflecopter giveaway
Posted by 3 Partners in Shopping at 11:13 PM