Welcome to Harborsmouth, where monsters walk the
streets unseen by humans…except those with second sight, like Ivy Granger.

Some things are best left unseen…
Ivy Granger’s second sight is finally giving her life purpose. Ivy and her best friend Jinx may not be raking in the dough, but their psychic detective agency pays the bills–most of the time. Their only worry is the boredom of a slow day and the occasional crazy client–until a demon walks through their door.
Demons are never a good sign…
A demon attorney representing the water fae? Stranger things have happened. And things are about to get very, very strange as a bloodthirsty nightmare hunts the city of Harborsmouth.
There’s blood in the water…
Kelpies have a reputation for eating humans. Unfortunately, kelpies are the clients. When an Unseelie faerie this evil stalks the waterways of your city, you have to make hard choices.
The lesser of two evils…
Shadow Sight is the first novel in the bestselling, award-winning Ivy Granger urban fantasy series by E.J. Stevens. The world of Ivy Granger, including the Ivy Granger Psychic Detective series and the Hunters’ Guild series, is filled with action, paranormal mystery, magic, dark humor, quirky characters, bloodsucking vampires, flirtatious demons, sarcastic gargoyles, sexy shifters, temperamental witches, psychotic faeries, and snarky, kick-butt heroines.
The Ivy Granger series has won numerous awards, including the BTS Red Carpet Award for Best Novel, the PRG Reviewer’s Choice Award for Best Paranormal Fantasy Novel, Best Urban Fantasy Novel, and finalist for Best Urban Fantasy Series. 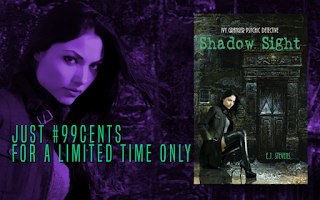 This promotion is brought to you by Pure Textuality PR.