A Call to Heaven by Jo Kessel Book Tour and Giveaway

A Call to Heaven


with a paranormal twist 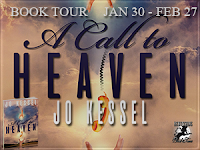 
Grief strips you raw and makes you feel as if you’re sleepwalking through life, like the pain will never go away.


I’m Amy Tristan. I’m no different than anyone else. I’ve loved, I’ve lost and it sucks. I’ve got a five-year old son and an abusive husband. My mother died six months ago and I miss her like crazy.


I’m the biggest skeptic when it comes to other-worldly stuff, so when I’m told that I can pick up the phone and call my mum in Heaven, I should disbelieve it, right? Wrong. I pick up that phone, because there’s nothing I want more than to hear her voice trickle into the receiver.


And you know what? It works. I get to speak to my mother. It’s a miracle. If only it could stay this way, with those calls just for me, but someone up on high wants me to choose three other people to make a call to Heaven too. Who should I pick? How can I trust them to keep the phone secret? Making the choice is agonizing - if I get it wrong, my calls will stop. I wish I hadn’t told Daniel anything. He’s this hot doctor that I’ve come to know. But doctors are scientists, and scientists are bigger skeptics than even me. He didn’t believe in the phone. He thought I should be admitted to a sanatorium. Telling him was either the best decision of my life, or the worst. I’ll let you decide…"


Everyone’s looking at me. I’ve got the yellow telephone in my hands and I’m not sure what to do with it. I take a seat at the end of the table and lay the phone down in front of me. Beth is to my left, Ben is to my right. Daniel is opposite me. I look from one to the other and feel color flood my cheeks. My gaze finishes on Daniel and stays there for a beat. He nods, his eyes encouraging me. I return the nod, take a deep breath and count down from three to one in my head.


“I’ve got to tell you all something.” My voice comes out as a thin squeak, but actually I’m surprised I manage to articulate at all. I’m hot, so hot. I lift the hair off the back of my neck, flapping it around to try to cool my sticky, clammy skin. I can’t breathe, I need air. I unlock the patio doors, flinging them wide open. The inside of my mouth feels rough as sandpaper. I’m desperate for a tall glass of water packed with ice-cubes but, when I turn to see six eyes staring at me, I dare not leave to fetch one. I feel like an exhibit in a museum and in some ways I wish I were. I could hide behind a Perspex box next to the yellow telephone with panel blurb doing the explaining for me. I could be part of a new exhibition entitled ‘Incredible Discoveries’. I would share the same hall as the dinosaurs and anything else which took aeons for people to believe existed. I draw a deep breath and continue.


A breeze blows through the open patio doors.


“What I wanted to tell you is this.” My voice is soft as a whisper. I sense all their bodies leaning closer towards mine, straining to hear. “I’ve recently started talking to my mother.”


I feel a great sense of relief, both that I’ve said it and that I no longer have to keep this to myself. Beth relaxes in her chair with a sigh, leans across and takes my hand, patting it. She’s got wavy brown hair and a kind, open face. She tilts her head sympathetically.


“Oh honey, you must have tried out that clairvoyant you mentioned. Please tell us all about it.”


I should have seen that one coming.


“No, you don’t get it.” I lift up the yellow phone, as if to demonstrate how to use such a contraption. In one hand I take the receiver, in the other the plug. “I don’t speak to her through a medium. I speak to her on this telephone. I plug it into a socket in my bathroom and I’m allowed to call heaven.”


Their mouths all open, Daniel’s is the widest. I don’t think any of them even realize they’re doing it. As feared, they are looking at me like I’m certifiably insane.


“I can see you all think I’m mad.” I actually manage to pull a small smile. Now that I’ve started, I feel much calmer. “And, if I were in your position, I would think I’m crazy too. But one night my mother came to me in a dream and told me I could use this phone to call her in heaven and, bizarre though it must sound, it turns out she was right. That’s why I stopped coming to Grief Support Group every week. I wasn’t grieving so much because my mother had come back into my life.”


The three pairs of eyes grow wider and wider, as if I’m slowly sprouting four serpent heads. I replace the receiver back into its cradle and drop the plug, holding out my hands in submission.


“You can believe me or not. It doesn’t matter. But the reason I’ve gathered you all here is because I’ve been asked to choose three other people to call to heaven.”


I sound like a fairy godmother or the good witch in the Wizard of Oz. I do not sound normal. I pause. The effect is dramatic although it’s not intended to be.


I look at them one by one.


“Beth, I know how much it might mean to you to be able to speak to your daughter and know that she is safe.”


“Ben, I’d do anything to be able to give you a chance to speak to your brother again.”


Ben nods, his mouth still formed in a perfect ‘O’.


Daniel is the hardest one for me to look at. He’s not nodding anymore and his eyes are no longer urging me to continue. Instead he’s shaking his head, a slow, subtle movement, but I catch it all the same. His full lips have now formed a thin line. He’s the only one who looks like he still thinks I’m certifiably insane. Hell, he’s a doctor; perhaps that shouldn’t come as a surprise. Part of me wonders whether I should abort this whole escapade and pretend it was all a joke. I’d do anything to not have Daniel stare at me in this way. He looks ready to call the local sanatorium and send them round with a straitjacket. But I can’t abort and I must continue. What happens next is up to him.


He opens his mouth as if he’s about to say something, but clamps it shut again without speaking. Nobody else says anything either. They all shift in their seats, pretending to take sips of coffee and look around the room. Perhaps they’re checking out the photos on the mantelpiece above the fireplace, trying to work out if I look like a madwoman in any of them. I pick up the knife. Now I probably do look mad or, at the very least, dangerous.


Jo lives in London with her husband, three children and Jerald the cat. In addition to being a novelist she works as a TV and print journalist (Sunday Times, The Telegraph, the Daily Mail and the Express.) If she could change one thing about her life it would be to introduce the thirty hour day, because twenty-four hours just isn’t long enough to squeeze it all in! Many a late night has been spent with a glass of red wine (preferably French) at her desk trying to keep her eyes open long enough to write these stories which keep demanding to be written. If only her cat didn’t constantly jump onto the keyboard as she writes, this book might have been finished months earlier. She loves yoga, skiing, travelling and English custard - though not necessarily in that order.