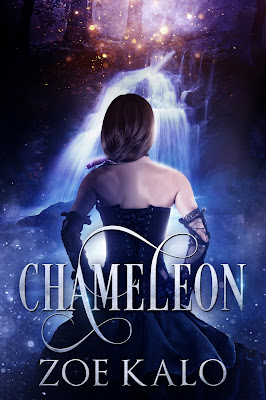 An isolated convent, a supernatural presence, a dark secret…

17-year-old Paloma only wanted to hold a séance to contact her dead father. She never thought she would be kicked out of school and end up in an isolated convent. Now, all she wants is to be left alone. But slowly, she develops a bond with a group of girls: kind-hearted Maria, insolent Silvy, pathological liar Adelita, and their charismatic leader Rubia.

When, yet again, Paloma holds a séance in the hope of contacting her father, she awakens an entity that has been dormant for years. And then, the body count begins. Someone doesn’t want the secret out…

Are the ghost and Paloma’s suspicions real—or only part of her growing paranoia and delusions?


What was your inspiration for Chameleon?


Like Paloma, I was partly educated in a convent school run by Catholic nuns. The convent was also an orphanage for girls, and actually some of the girls—Ramona and Sylvy—were based on real people. Adelita and Rubia were pure creations of my imagination. I did attempt to do a séance in one of the classrooms once, an act that made me end up in Madre Superiora’s office…but I didn’t get kicked out…nor experience a ghost. 


Some of the scenes in the book depict the nuns in a very negative way. Can you comment on that?


Some of the nuns are nice, others…not so nice. That’s just the way it was. Except for Madre Superiora, all of the nuns in my book are based on real nuns. Madre Estela, Madre Julia, Madre Margarita were all real. Yes, Madre Julia with her giant wooden spoon, real. It may seem hard to believe, and certainly it would be tough to believe nuns can behave like that nowadays. But remember the story takes place in 1970s Puerto Rico. Catholic nuns were very strict back then, their disciplining methods cruel, but this was considered normal.


How long did it take you to complete the book?


On and off, about two years. But the story and characters simmered in my mind for years before then.


Did you have to do a lot of research?


I did a tremendous amount of research on psychopaths and psychopathy, and a fair amount on natural drugs found in tropical forests, though I ended up using only a tiny fraction of the material. I also consulted a police officer for the parts about police procedural and interrogation.


Yes, I do! I used it in Daughter of the Sun when the protagonist was drugged, and also in this book in the climax with Paloma. The writing becomes erratic and stream of consciousness because it reflects and mimics the altered mind of the character. No commas, no punctuation, one run-on sentence after another. I love using this literary technique but sometimes it can be confusing for the reader, so trying to find a balance can be very challenging.


Did you listen to any particular kind of music while working on the book?


I sure did! I can get quite obsessed about that, listening to the same compositions again and again. This was my music list for Chameleon… all of them haunting, mysterious and dark!


Interview with the Vampire soundtrack: https://www.youtube.com/watch?v=N6aPxaCpP78


A certified bookworm and ailurophile, Zoe Kalo has always been obsessed with books and reading. Reading led to writing—compulsively. No surprise that at 16, she wrote her first novel, which her classmates read and passed around secretly. The pleasure of writing and sharing her fantasy worlds has stayed with her, so now she wants to pass her stories to you with no secrecy—but with lots of mystery. She lives amongst cats and books in Belgium, and is the author of the Cult of the Cat young adult fantasy series and the Retribution novella series for adults.


Sign up for her newsletter at www.ZoeKalo.com and get her exclusive short story “Irkalla.”