Her Secret Ranger by Donna Michaels Excerpt Reveal and Giveaway

Kissing the sexy soldier was a dare she couldn’t resist… 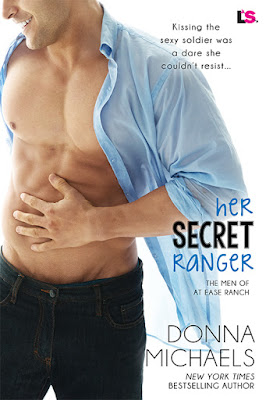 Kissing the sexy soldier was a dare she couldn’t resist…

By-the-book event planner Beth Brannigan’s best friend dared her to kiss a cowboy. She should have said no. Instead, she said please…again and again. If her brother finds out she’s dating—okay, kissing—okay, sleeping with—one of his military buddies, he’ll kill her. Assuming he doesn’t kill his friend first.

Former Army Ranger Brick Mitchum isn’t a relationship kind of guy. But then he meets Beth and starts to wonder if maybe it’s time he settled down. She’s mysterious. Unpredictable. Curvy in every way he needs… And hiding something. He’s just got to figure out what.

“I know what we should do. Let’s play truth or dare.”
Crud.
Beth drew back and adamantly shook her head. “Let’s not.”
“Come on. We could both use something to lighten things up. So, let’s see…” Her friend’s gaze narrowed as she tapped a finger on her chin. “I can’t help but feel there’s something you’re not telling me about the Roadhouse. The fact you knew about the line dancing has my Spidey sense tingling. So…truth: Did you meet someone there the last time you were in town?”
Damn. She’d forgotten about her friend’s astute superpower. “What are you talking about?”
Rachel’s amused, albeit determined, blue gaze bore deep. “Either tell me the truth about that weekend or take a dare.”
Double damn.
Beth didn’t do dares. Ever. She’d always taken the “truth” option of the game during their adolescence. She couldn’t risk reprimands or hospital bills back then. Not much had changed. But she wasn’t about to reveal her sexy cowboy weekend, either. With a lift of her chin, she held Rachel’s gaze. “Dare.”
The bugger’s grin grew wicked as satisfaction gleamed in her eyes. “I dare you to kiss the next cowboy who walks through the gate.”
Beth gasped. “I can’t do that! What if he’s married?” She jumped to her feet and headed to a nearby trash can to toss her garbage. “Not happening.”
Rachel followed and shrugged. “You have to. You chose dare. But, I’ll amend it to: you have to kiss the next single cowboy who walks through the gate. We’ll watch for wedding rings. And just because you’re not looking doesn’t mean you can ignore the da…amn.” Her friend blinked. “Wow, Beth. I almost wish you’d given me the dare. Turn around and check out your ‘single’ cowboy.”
Without giving her the chance to protest, Rachel grasped Beth’s shoulders and physically turned her to face the gate and one hell of a sexy cowboy. Well over six foot of solid muscle that rippled under a black T-shirt and a pair of jeans hugging lean hips and thighs, the guy oozed hotness she felt with an invisible wave of heat.
Her throat went dry. It was…him. The cowboy from two weeks ago. Seriously? What were the chances he’d walk back into her life at that exact moment? “Uh…”
“I know, right? And there’s not a wedding ring in sight. Now go over there and kiss him.” Her snickering friend pushed her after the hunk striding toward the livestock section of the fair. “Go on before he gets away. Or is that what you wanted?”
She gulped. Pulled herself together. The knowing tone in her friend’s voice revealed she expected Beth to chicken out.
Wrong.
Any other time, yes, she’d lose the dare. It was childish and irresponsible, and she didn’t have time for foolish games. But she did have time to help her friend de-stress. Her friend who was also her client. It was Beth’s duty to put her client at ease. So, technically, it was her duty to kiss the sexy cowboy whose body she knew as well as her own.
That was her story and she was sticking to it.
“Fine. I’ll do it.”
Rachel squealed and clapped her hands.
Grasping bravado with two fists, Beth set her shoulders, lifted her chin, and marched after the hot guy striding away from her down the fairway. So what if she’d decided he was part of her past? The opportunity was too good to pass up. Things like this never happened to her.
Zigzagging around fairgoers, she avoided running into two children wearing a blue coating of cotton candy, and closed in on her prey. Her confidence rose with each step. Not only had she received her first ever dare, she was actually in the position to have the upper hand on the challenge.
A flicker of guilt and a touch of anxiety mixed with excitement. She pushed them both aside and smiled when the cowboy suddenly stiffened and came to a halt. It was as if he could feel her presence as sure as she could feel his. Not wanting Rachel to see the guy’s expression, Beth didn’t give him a chance to turn around. She slid in front of him, her anxiety fading at the pleasure curving his mouth into a sexy grin, dimpling his cheeks.
“Hello, Brick,” she said.

Then she cupped his deliciously scruffed jaw, pulled his face down, and kissed the ever loving heck out of him.

Donna Michaels is an award winning, New York Times & USA Today bestselling author of Romaginative fiction. Her hot, humorous, and heartwarming stories include cowboys, men in uniform, and some sexy, primal alphas. With a husband in the military fulltime, and a household of nine, she never runs out of material to write, and has rightfully earned the nickname Lucy…and sometimes Ethel. From short to epic, her books entertain readers across a variety of sub-genres, and one has even being hand drawn into a Japanese translation. Now, if only she could read it. 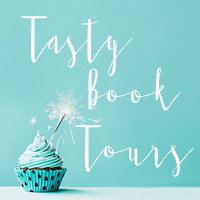