The True Meaning of Myrrh by John Manderino Blog Tour 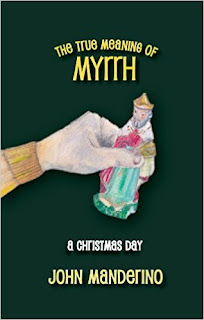 
Set in suburban Chicago during the 1960’s, The True Meaning of Myrrh is an amusing, but gritty, look at the holiday season as it used to be. The nostalgia classics: turkey, snowball fights, droopy Christmas trees, and midnight Mass are leavened with a drunken Santa, oedipal anguish, prostitutes and an aggressive midget.

One brother can’t shake his profound disappointment at receiving slippers when he thought the box held hockey gloves. Meanwhile his older brother receives a tape recorder and is trying to capture all the “magic” in his “special holiday broadcast” with mixed results. The boys’ politically divided parents have a serious falling-out about the Holy Family versus the welfare state and aren’t talking.

And then there are the wounds that only family can inflict on each other like the too-clever comment that devastates their Santa-dressed uncle.

Will Len manage to rise above the bitter disappointment? Will his parents reach across the aisle for the sake of the day? Will Sam learn a Christmas lesson that doesn’t fit smoothly into his “holiday broadcast”? In The True Meaning of Myrrh, this and other questions get answered, including what is myrrh, anyway. 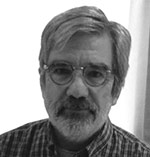 
JOHN MANDERINO grew up in the Chicago area but now lives in Maine with his wife Marie, where he teaches college writing and provides coaching and editing services to other writers. He has three novels, two short stories collections and a memoir published by Chicago Review (Academy Chicago), and a Christmas novel published by Ice Cube Press. John has also written plays that have been performed at theater festivals and other venues. A stage version of his memoir Crying at Movies was produced.


Christmas is supposed to be about Jesus being born, I know, but I’ve been asking for hockey gloves since before Thanksgiving and you know what I got?


Okay, not all clothes. I did get a new hockey stick, plus a puck, also a little castle for my fish bowl, and a book called Score! The Andy Babcock Way to Better Hockey. But the rest was all clothes: a sweater, a shirt, house slippers, plus socks in the mail from Gram.


Sam got a lot of clothes, too, but he wanted clothes this year. One of the clothes he wanted, and got, was this shiny red half-robe thing called a smoking jacket, with black lapels and his initials in curly letters on the pocket, SLR, for Sam Louis Rossini. I didn’t tell him but he looks like a fool in it.


Another thing he asked for and got was a portable tape recorder. Soon as he got it he started recording stuff, calling it Christmas with the Rossini Family, 1966, a Special Holiday Broadcast. You should hear me saying, “A sweater! All right! Thanks, Mom! Thanks, Dad!”


I had some money this year from Saturday mornings at Evans Drugs doing their floors and windows, so I got Mom an expensive, silky, multi-colored headscarf. “Isn’t…that…beautiful,” she goes, holding it up. “Thank you, Len.”


She laughed like I was being funny and put it on and tied it underneath her chin: “How’s that?”


For Dad, a brand new ash tray. “Thing’s heavy,” he goes, weighing it in his palm, nodding at me.


And for Sam, an eight-by-ten glossy colored photo of this year’s Chicago Black Hawks hockey team. He doesn’t like hockey but maybe this will help. I told him he could frame it and hang it in our room if he wanted.


He said he would think about it.


I even had some money left over to get my friend Eddie a three-pack of ping-pong balls. The ones we were using were getting like stones.


For me, that puck I mentioned. I already had one but that was all right, now I had two, and I thanked him.


“Well,” he goes, “I figured why not get you something connected with hockey since you actually like hockey— see the way it works?”


He was being sarcastic about me giving him that picture of the Black Hawks, but I don’t even know what Sam likes anymore, so why not give him something at least I like.