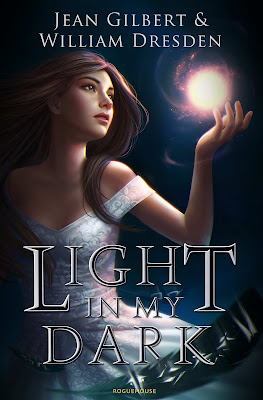 Two boys love her. Two worlds need her. Only she can save them both.

Sixteen-year-old Harper Deveraux has longed for an adventure ever since her mother died of cancer four years ago. Much to her dismay, she is stuck in Glen Eden, a small mountain town in upstate New York that does little to fuel her hopes and dreams.

Another year of high school has begun, and with the Moon Dance only a few weeks away, Harper suddenly finds herself torn between the affections of two boys: her best friend Jack, and a new boy from the City named Knes who might not be from this world.

Strange things begin to happen in Glen Eden when Harper uncovers a mystery that involved her mother and a realm shrouded in darkness that lies beyond the wall... A realm that Knes intends to take her to. Only Jack stands in his way.

Light In My Dark, is an action-packed modern YA fantasy, filled with dark forces, love, and self-discovery.

The heat under Harper's sweater disappeared the longer she stared at the house. Goose bumps tickled her flesh. She wrapped her arms around her body, but the chill remained. Even so, her eyes refused to look away from the house.
"Well," she said," in the real world it is said that she fell through the floor in a part of the house that was still under construction at the time. No mystery there. Just an accident."
Jack raised an eyebrow at her. "In the middle of the night? Who goes walking around a construction site in the middle of the night? That's just stupid. What gets me is that's what all the tourists come to see, not the lake or the mountains or anything else that Glen Eden has to offer. Give the house a ghost, and they come running."
"Maybe it deserves a ghost. At least then it would be lived in."
Neither one said anything for a moment as they stared at the mansion.
Finally, Jack spoke again. "There must be over a hundred rooms in there. It'd take days to explore them all."
"It'd be an adventure."
"You'd like that, wouldn't you?"

William Dresden is an author and award-winning screenwriting. He spent several years as a script doctor and pursued the dream of writing hollywood blockbusters. Now he mostly writes fiction and enjoys spending time with his family and friends. William currently lives in Virginia with his wife and two children.

Jean Gilbert is an award winning speculative fiction writer from New Zealand. She is a Core member of SpecFicNZ, and is also the coordinator for SpecFicNZ Central. Jean's novels include the Vault Agency Series: Shifters, Ardus, and The Vault. You can find her short stories Blonde Obsession in Baby Teeth: Bite Size Tales of Terror, and Pride in the Contact Light Anthology.

GIVEAWAY:
a Rafflecopter giveaway
Posted by 3 Partners in Shopping at 11:36 PM