Sunrise Over Brasov by Stephanie Burkhart Book Blast and Giveaway 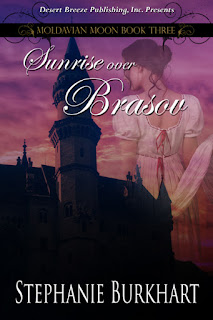 Rosa Getzi lives a life of intrigue at Poiana Brasov with Clement, a werewolf, and Cassandra, the witch. Her past doesn't matter to her – until she discovers what it holds.


Prince Michael Sigmaringen joins his sister-in-law, Caroline, and the vampire prince, Darius, in a daring rescue, igniting Rosa's desire to find her family. However, all is not as it appears. Rickard, Rosa's friend, escapes with her. Clement will go to any lengths to get Rosa and Rickard back.


At Darius' fortress, Michael soon discovers Rickard is a new breed of werewolf – one who can control the change, and Clement hopes to exploit Rickard's abilities.


Michael's courage, strengths, and convictions will be tested like never before. Can Michael and Rosa find true happiness and the rid the lupine haunting of the Sigmaringens once and for all?


Michael's eyes snapped open and he raced to her side. "What's wrong?"


"It was just a dream." Her voice faded away. Sweat beaded on her brow and her body


trembled. It must have been a disturbing dream if it affected her like this. The need to comfort her outweighed his common sense to put distance between them and he placed a hand on her shoulder.


She turned to face him, confusion splaying across her lovely features.


"I was in my room sketching and Rickard came in--"


Michael scowled and removed his hand. "Did he hurt you?"


"No. He was talking about Cassandra."


Michael drew in a breath to calm his displeasure. He hated to hear Rickard's name on her


lips. Every time she mentioned him, that arrow in his heart twisted deeper. "What did he say?"


"Cassandra asked him questions about the wolf who made him, but Rickard couldn't answer them all. His memory had holes -- pieces of time he couldn't remember."


She wrapped her arms around herself. "He was given anise, wasn't he?"


She exhaled, striking a vulnerable pose. Her usually focused eyes stared at the wall. Michael grabbed a fresh log and threw it onto the fire. He poked at the burning wood with a stick.


"What did you do at the fortress?"


"I had lessons with Cassandra in the morning. In the afternoon, Lucien or one of the


guards would escort me into Brasov proper--"


Michael raised an eyebrow. Was she a prisoner or not? "What did you do when you went to the city?"


"I usually visited the St. Nickolas Church. They have an extensive library with a comprehensive section on witchcraft and werewolf legends. I spent an hour or two studying certain books, reading newspapers, and taking notes."


"You were a researcher?"


"I guess you could say that. I also went shopping for personal items."


Michael reached over, removed another apple from his food satchel, and offered it to her,


recalling she hadn't finished the previous one.


Rosa slid her fingers next to his and a familiar pulse traveled up his arm. She affected


him even now. He jerked his hand away, but the pleasure from her touch lingered. A quiet moment passed between them. Finally, he reached over and placed his thumb on her chin. Some instinctual force inside him told him she needed this. Their eyes found each other. A spark passed over her expression. Did she recall something? 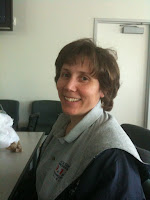 
BUY LINKS FOR SUNRISE OVER BRASOV:


Stephanie will be awarding a $10 Amazon or B/N GC to a randomly drawn winner via rafflecopter during the tour.