LOVE ON THE MOUNTAIN


Peace and quiet—that’s all Connor Pierce wanted from the rented cabin on Crimson Mountain. Yet the caretaker turned out to be lovely April Sanders—a total distraction. As were the two little girls she was caring for. Connor’s plan to forget his painful past soon detoured into giving the ladies a Christmas to remember.


Being named guardian of two motherless girls has upended April’s world. Add to the mix a mysterious, brooding writer claiming he wanted to be left alone while going out of his way to bring a little joy to the girls, and she has quite the quandary. April had counted herself out of a happy ending. But maybe Santa still had a few surprises up his merry old sleeve… 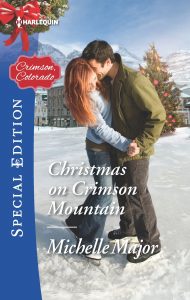 Excerpt from Christmas on Crimson Mountain:


“Thank you for taking care of me these past couple of days.”


He acknowledged her words with a small nod, or maybe it was the bitterness creeping into her tone that he recognized. “How are Ranie and Shay?”


“Yes.” He sighed. “Even though I don’t want to care. The other night...on the highway...it affected me. Hearing that scream when the car slid on the road and the headlights moving closer.” He paused and a shudder ran through him. “I’m sorry I disappeared, but I wasn’t fit company for anyone after that.”


“It’s fine.” She tried to hold on to her anger even as it slipped through her body like grains of sand through her fingers. She needed that anger. It was safer with this man. Safer for her heart. “You don’t owe me an explanation.”


“I want to give you one anyway.” His hold on her gentled and he rubbed his thumb over the sensitive flesh on the inside of her wrist. “I’ve missed you, April. I’ve spent the past three years alone, and suddenly I’m lonely without you. I stopped caring. I didn’t think I had it in me to care, and I’m still so turned around. Every little thing sets me off and I can’t stop it. But I also can’t stop wanting to be near you. It doesn’t make sense.”


She closed her eyes against the onslaught of emotions that poured through her at his words and the gentle pressure to her skin.


“Do you know,” he asked, shifting so close now that she could feel his breath against her hair, “that I listen for the door to close after you leave and rush down to the kitchen because your scent lingers after you’re gone?”


She huffed out a laugh that sounded breathless to her own ears. “Are you saying I smell?”


“Like lavender and vanilla. I’ve made an idiot of myself the past two days following traces of you around the house.”


“Why are you telling me this?”


“Because I want you to know what you do to me, even if I should stay away. It’s better for both of us if I turn around and walk back to my bedroom until you’re gone.”


She waited a moment, but he didn’t move. “You’re not walking.”


“Don’t go,” she whispered. Slowly, as if she were gentling a stray animal, she lifted her hand. Her finger brushed the prickly strands of his dark beard, and his lips parted.


“I forgot to shave,” he muttered.


He took a breath, released it and then nodded. “Writing.”


He shrugged and looked away. “Who knows how long it will last. But the words are coming. So damn many, drowning me with their force. It’s like...”


She pressed her palm to his cheek, gratified when he leaned into it. “Like what?”


“Like it used to be.” He said the words softly, as if they were an apology. April could feel the tension in his body and wished, just for a moment, she could transfer his pain to herself. Give him a few seconds of remembering what it was like to live without the weight of guilt and sorrow bearing down on him.


“Look at me,” she said, moving closer to him, pressing into his warmth. His arms came around her waist, his hands splayed open against her back. She could feel their heat and strength through the thin cotton of her pajama shirt. So much talent flowed out of those hands. The worlds he created within his imagination and put on paper for readers to discover. “You have a gift, Connor Pierce.”


“Don’t say it. Whatever you’re thinking.” She brushed her lips over his. “Those words are in you. The stories you write are part of you.”


“How can they still be there when I’m dead inside, April? They were part of my life before, but now I’m—”


“You’re here,” she told him, and held her hand to his chest. His heartbeat was strong and sure under her palm. “With me. Now.”


“You make me feel things I’d thought I lost the capacity to feel. You make me want things—” His voice broke off as he drew in another deep breath. He leaned down until their foreheads touched. They stood that way for several long moments, her lips just grazing his. She breathed him in and it felt like she was pulling his essence into her lungs. Like he was part of her. A part she thought she’d lost after the illness and heartbreak that had changed who she was inside.


“I’m sorry I can’t be the man you deserve,” he whispered. “I’ll hurt you and girls. I hurt everyone—”


“Not now.” She pressed her mouth to the base of his neck, tasted the salt on his skin and wanted more. “This moment is ours.”


He claimed her mouth then, kissed her until the feel and taste of him was all she knew. Everything else burned away in the flame that was her need for him. He pulled her closer, if that was possible. Their tongues tangled and his hands skimmed under the shirt and up her spine, sending tingles as they moved. His kiss was demanding and consuming, and every inch of her body burned for him. For more.


His lips trailed over her jaw and he nipped at the sensitive flesh of her earlobe. “Will you stay?”


The simple question rocked her. How was it that such a longing could have been buried inside her and she’d never guessed? Even at her most in-love-and-alive, she’d never felt anything quite like the force of her desire for Connor. Still, she shook her head. “I have to go back in case the girls need me. If Shay wakes up...”


“I understand,” he said, pulling his hands from underneath her shirt.


No, her body screamed. Don’t let him go.


“Come with me,” she told him, lacing her fingers with his.


He stared at her, his eyes unreadable once more. She hated that he could slip behind his mask so easily. She wanted to break through until she saw every bit of him, good and bad. She wanted to know him and, in return, allow him access to all the secret places she kept hidden from the rest of the world.


Michelle Major grew up in Ohio but dreamed of living in the mountains. Soon after graduating with a degree in Journalism, she pointed her car west and settled in Colorado. Her life and house are filled with one great husband, two beautiful kids, a few furry pets and several well-behaved reptiles. She’s grateful to have found her passion writing stories with happy endings. Michelle loves to hear from her readers at www.michellemajor.com.


a Rafflecopter giveaway
Posted by 3 Partners in Shopping at 11:56 PM