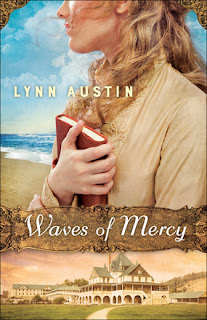 Haunted by the Unknowns of Their Pasts, Two Women Search for Answers Along the Shores of Lake Michigan
Chicago socialite Anna Nicholson retreats to the Hotel Ottawa in Holland, Michigan, after breaking her engagement with her wealthy fiancé. Filled with questions about her newfound faith and troubled by a recurring nightmare, Anna finds solace in Derk Vander Veen, a seasonal hotel worker who plans to go into the ministry.

Prompted by a request from her son, Geesje de Jonge begins to sift through memories of emigrating from the Netherlands almost fifty years ago. As she writes them down for the Semi-Centennial anniversary of the town's settlement, her story takes on a life of its own as she honestly and painfully recalls her regrets, doubts, hardships, and joys. Her story captivates Derk, who sees similarities between Geesje and Anna, and wishes to bring the two together.

Past and present collide as Anna and Geesje seek clarity, but neither expects the revelations that await them.

"Austin has crafted an interesting, historically accurate portrait of two profoundly different characters: one looking back at life, the other taking her first faltering steps toward independence."
Publishers Weekly

"Two riveting storylines and two fascinating heroines join a cast of intriguing supporting characters with rich historical detail. Additionally, the switch between the story's past and present timelines -- as well as alternating between first-person narrators -- remains seamless and distinct."
RT Book Reviews

"Interlacing the past with the present-day lives of Anna and Geesje, Austin compassionately delivers a moving tale of family bonds, tests of faith, and abiding love."
Booklist starred review


"Waves of Mercy". is another great novel by author Lynn Austin. Anna Nicholson has just come to Hotel Ottawa in Holland, Michigan to get over a broken future marriage to a rich fiancé.  She meets Derk Vander Veen who works at the hotel who wants to be a minister. He tries to help her with her issues.   Geesje de Jonge's son has  asked her to research stories of people who came there 50 years ago from the Netherlands.  She is doing this research for the Semi-Centennial of their town. She becomes very engrossed in their stories. Derk tries to get her and Anna  together but, will they really get along? He thinks they are alike. I was totally surprised at the end. I give this book a 5/5. I was given this book for a review from Bethany House and all opinions are mine.
Posted by 3 Partners in Shopping at 8:20 PM