Into the Shadows by ClareMarie Book tour and Giveaway 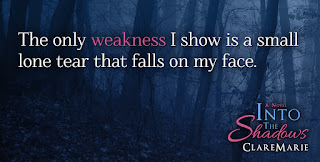 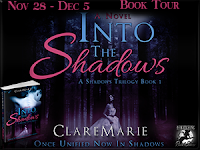 Imagine living in a world where there are more than humans – a society where Paranormals co-exist with us, and a corrupt government kidnaps them so they can study their immortality and powers.


Where would you go?


Imagine thinking you were human all your life, then find out you’re not, and if the government discovers you, you’ll become the most desired paranormal test subject to ever live.


Where would you hide?


In 2050, our world was divided into four species - Humans, Paranormals, Descendants, and Mutated Humans. Ava James thinks she's human, but finds out she's not… and in more danger, than she ever could have realized.


Her days just got a whole lot busier.


"You need to learn to protect yourself. You need to know the dangers of what you are, but also the strength of who you are."


I'm lying here curled into a ball on the cement floor after many weeks in captivity, beaten, bruised and weak. My wounds will soon heal before the next interrogation but as always I'll remain silent. I think back on a happy memory I shared with him; Kyran Lewis.


Our world was once free until they came along. Our country once in the light now exists in shadows, because they live in darkness.


Nine months earlier, I was walking to work through the woods near my home on a cold, foggy morning where the scent of pine is in the air and the crinkle of leaves below. I could certainly feel someone or something following me. I see movement from behind a tree, a grey wolf with soulful green eyes; I’m mesmerized. The wolf stares back into my blue ones, well aware that I should be terrified, but strangely a warm feeling of calm fell over me.


It took a few steps towards me and I stood still not out of fear but letting him smell me knowing dogs like to do that and wolves are probably similar I would imagine. I'm not sure how I pick up the wolf is male, just a hunch I feel and oddly a sudden hit of attraction which quite frankly is disturbing.


The wolf stops in front of me continuing to look into my eyes, I stare back, and deep in his, I could feel intelligence in there much more than an animal’s. The woods was grown for the werewolves by The Government next to Central Park, and it isn't difficult to figure out he is one. I'm not sure how but I know my life just changed, and in a sense something moved inside of me clicking into place and from the slightly startled look in his green eyes, he felt it too.


I put my hand out, palm up, for him to sniff and to come closer. He takes a sniff but I think purely for show sending out his ok for me to stroke his fur. I move towards him allowing my hand to run through his pelt. It's so soft and glossy looking, he makes a rumbling noise in pleasure. Remembering I should be at work soon, I move back and start walking the way I'd been going before I saw him but looking over my shoulder every few seconds to watch the wolf who's going from tree to tree following me.


The wolf stops on the border of Woodlands Creek as I leave him, going into the streets of New York, crossing the road. I look back at him one more time before opening the door to work and find him still watching me, sitting on his haunches.


That's the first day I met Kyran Lewis, but I hadn't known that then. I wouldn't find out the secret he held until many months later when my story began.


Would you want to live in the shadows?


Paranormal and Contemporary Romance Author of The Shadows Trilogy and The Rockstar Alliance Series.


ClareMarie was born in England, but now lives in Galway Ireland. ClareMarie started songwriting at fourteen which grew into a passion for writing.


She published her debut Sci-fi/Fantasy novel on November 10th, 2016.