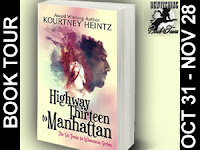 
"Family secrets, paranormal suspense, and romance collide in Heintz's fascinatingly original tale. A compelling read that will keep you guessing and haunt you long after the last page is turned." -Gretchen Archer, USA Today Bestselling author of the Davis Way Crime Capers


The Six Train to Wisconsin

Kourtney Heintz is the award-winning and bestselling author of The Six Train to Wisconsin (2013), the first book in The Six Train to Wisconsin series. She also writes bestselling young adult novels under the pseudonym K.C. Tansley. Heintz is a member of the Mystery Writers of America, Sisters in Crime, Romance Writers of America, and Society of Children’s Book Writers and Illustrators. Heintz has given writing workshops and author talks at libraries, museums, universities, high schools, conventions, wineries, non-profits organizations, and writing conferences. She has been featured in the Republican American of Waterbury, Connecticut; on WTNH’s CT Style; and on the radio show, Everything Internet.


Kourtney resides in Connecticut with her warrior lapdog, Emerson, and three quirky golden retrievers. Years of working on Wall Street provided the perfect backdrop for her imagination to run amok at night, envisioning a world where out-of-control telepathy and buried secrets collide.

Tour Giveaway 5 signed copies shipping to anywhere in the world