The Moreva of Astoreth by Roxanne Bland Book Blast 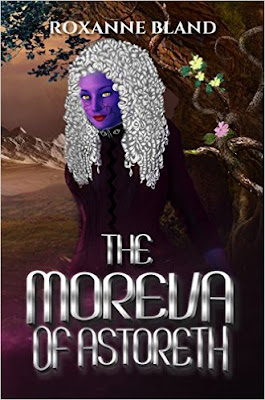 Moreva Tehi, scientist, healer, priestess of the Goddess of Love and three-quarters god, is a bigot. She hates the hakoi who are the Temple’s slaves. When she misses an important ritual because the enslaved hakoi are participants, her grandmother, the Goddess Astoreth, punishes her by exiling her for a year from her beloved southern desert home to the far north village of Mjor in the Syren Perritory, (where the hakoi are free) to steward Astoreth’s landing beacon. But Astoreth forbids her from taking with her scientific research on red fever, a devastating scourge that afflicts the hakoi. She does so, anyway.

The first Mjoran she meets is Laerd Teger, the hakoi chief of the village, who appears to hate her. She also meets Hyme, the hakoi village healer, and much to Moreva Tehi’s surprise, they form a fast friendship. This friendship forces her to set upon a spiritual journey to confront her bigotry. While doing so, she falls in love with Laerd Teger, who returns her love. She eventually has a revelation about the meaning of love, and rids herself of her bigotry. And she develops a cure for red fever, and is the first healer to do so.

But there is a price for her love for Laerd Teger, and that is her certain execution by the Goddess Astoreth upon her return home because she has broken her sacred vows. But then, through Laerd Teger, she learns a terrible secret about her gods, that they are not gods at all, but aliens, and rather than being part god, she is part alien. Her world destroyed, she turns on Laerd Teger for showing her the truth. They eventually reconcile. But there is still the problem about her love for Laerd Teger. Astoreth will know what she has done and will execute her. She formulates a plan, involving the erasure of her memory, in which she will bargain for her life by giving Astoreth the formula for red fever. Astoreth agrees. For breaking her vows and disobeying a direct order not to take her red fever research to Mjor, Astoreth strips her of her morevic status and exiles her again to Mjor. Back in Mjor, she recovers her memory and sends the red fever formula to Astoreth. Now freed from the constraints of being a Moreva, Tehi and Teger embark on a new life together.

Book Excerpt:
The airship landed on its pad. After the pilot, a Devi lesser god, gave the “all clear” I stepped out the machine onto the stone slab and walked away.
The trip to the Syren Perritory had been awful. I’d never flown in a Devi airship, and I was sick the entire time. Seeing my distress, the pilot took pity on me and handed me a bag. I promptly threw up into it. Then he turned in his seat and peered at my face. Reaching behind him, he handed me a stack of bags. I took one and vomited into that, too. Two bags later, I thought I’d finally be all right. Then we flew into something the pilot called turbulence. Despite its leviathan size, the airship was buffeted about, and I was sure we would die. I picked up another bag. I don’t know how many bags I used.
At long last, we reached our destination. Even during our descent, I could see the landing beacon. A colossus, the beacon sat on its tower of white kyrolite, its stationary dish resembling a silver flame in the twin sunslight. On the ground, I could see alongside the tower two late-model tanks. Dwarfed by the tower’s size, they looked insignificant.
After getting off the airship, I walked toward a large group of people standing in the distance. I took in the place where I would stay for the next year. All I saw was a wall of grayish-black stone, with two huge and closed stone doors set in its middle. At least eighty šīzu high, the wall was crenelated at the top with deep, narrow slits. A steep-pitched roof partially covered it. Two towers, much smaller and shorter than the beacon, anchored the wall at each end. A short, covered kyrolite bridge beneath its roof connected the top of the smaller tower on the right to the beacon. On the ground, the tower was connected to the beacon itself. I straightened my neck and looked directly ahead. Next to the fortress, the enormous beacon tower looked out of place.
I reached the first of three people standing out from all the rest. Morevi Eresh, the morev who’d been on duty for the past year, stood before the garrison. Eresh and I couldn’t have looked more different. His skin was three shades lighter than my medium-hued, blue-violet Devi coloring. He had long, tight curls like mine but whereas mine were white—like the Devi—his were black. He was tall and slender like all morevs, except me. I had the jutting breasts, small waist and flaring hips of the Devi, but instead of being statuesque like them, I was short.
I liked Eresh. He was funny and irreverent, unlike the rest of the morevs serving the Temple. He was my best friend. He was my only friend. I’d missed him terribly.
The forty-one person garrison stood at attention. Wearing a solemn expression, Eresh placed his hands together, palm to palm. I did the same. We gave each other a deep bow. “Moreva Tehi, may the Most Holy One turn Her face to you.”
“And to you, Morevi Eresh.”
Our formal greeting accomplished, Eresh smiled a little. “Welcome to the Syren Perritory and the Mjor village.” Then he turned to a blue-uniformed hakoi standing a step behind him. “This is your second in command, Kepten Yose.”
I nodded once. “Kepten.” Kepten Yose was short, too, but not as short as me.
“Moreva Tehi.” He inclined his head and clicked his heels, a proper military salute to a superior officer. “Garrison ready for inspection, Moreva.”
I looked sideways at Eresh, who gave me a nod. “Very well, Kepten. Lead the way.”
We walked along the ten orderly rows of four troops each. They looked straight ahead, their eyes never veering from whatever it was they were looking at. Craning my neck, I peered into their faces. They were blank, but there was something in the eyes I couldn’t place, a look the hakoi in Uruk didn’t have. I wondered about it for a moment, then dismissed it. It was probably my imagination. At least they didn’t smell.
Inspection completed, I turned to meet my host. My gaze, starting at his brown fur vest-covered midriff, slowly traveled up, and up some more. He was the biggest hakoi I’d ever seen. His muscular shoulders looked as broad as the mountains that surrounded us. His skin, deep bronze, wasn’t like that of the Kherah hakoi, who were pale. His long, thick golden hair, ruffled by the breeze, was the same shade as the third, summer sun. He had light-colored brows—almost white—and a short beard of the same color. But it was his eyes that intrigued me most. All the hakoi I’d ever known had brown eyes. His eyes were blue, like the stars, and just as cold.
I didn’t like him. Judging by his scowl, he didn’t like me, either. 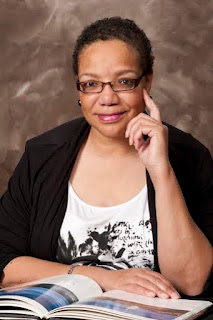 Roxanne Bland grew up in Washington, D.C., where she discovered strange and wonderful new worlds through her local public library and bookstores. These and other life experiences have convinced her that reality is highly overrated. Ms. Bland lives in Rosedale, Maryland with her Great Dane, Daisy Mae.

Her latest book is the science fiction novel, The Moreva of Astoreth.