The Cupcake Diaries
Sweet On You, Recipe for Love, Taste of Romance
By: Darlene Panzera 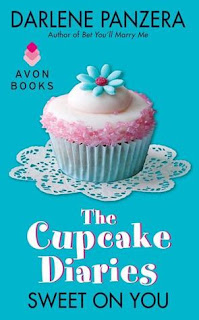 Fans of Debbie Macomber will love THE CUPCAKE DIARIES: Sweet on You, the first in the new and exciting three-book romantic comedy, by Darlene Panzera. Set in the small seaport town of Astoria, Oregon, Sweet on You begins the delicious and charming mini-series with Andi Burke’s adventure through love and cupcakes.
Sisters Andi and Kim, along with best friend Rachel, haven’t had the best luck in recent months: unemployment, divorce, and heartbreak. After so many disappointments, what can the trio do to change things around? Open up a much needed gourmet cupcake shop of course!
Andi has always had a dream—a kitchen big enough to bake and dance in, while still being able to support her dear daughter Mia, and hopefully find true love (one day). Could opening up a cupcake shop make it all a reality?


Together, the best friends are determined to open up Creative Cupcakes. But, with no business experience or money to finance the project it seems their dream won’t come true. Until, Jake Hartman, the hunky Astoria Sun reporter, offers to partner up with them.
Trying to hold it together as a single mom hasn’t been easy, and the thought of dating hasn’t crossed Andi’s mind since her divorce. But, the way Jake keeps looking at her might change her mind. After all, what could go wrong?
Plenty! There's a shady tattoo parlor behind their shop and a crowd of crazy Zumba dancers out front—ready to ruin them. The trio is forced to think quick to counter the attacks from Zumba fanatic Pat, while still finding a way to bring in business. It seems the only thing that’s going right is Andi's blooming romance with Jake. As if things weren’t hard enough, Jake’s media crew captures a story that could shut them both down forever.
Avon Romance / Amazon / Barnes and Noble 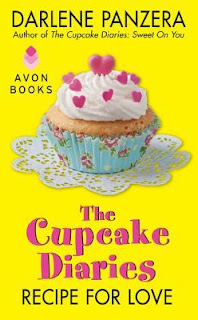 The Cupcake Diaries Book Two: RECIPE FOR LOVE
(Avon Impulse; on-sale May 14th, 2013; e-book ISBN: 9780062242686)
For fans of Debbie Macomber comes Recipe for Love, the second installment in the Cupcake Diaries series Relationships can be tricky, but will Mike the magician convince Rachel to break her two-date rule? Rachel Donovan believes first dates are fabulous, second dates are fun, but third dates? She never sees a guy three times in a row for fear he'll break her heart, but she's tempted to make an exception when her coworkers, Andi and Kim, hire Mike Palmer to drive their Cupcake Mobile. Mike meets Rachel when he's wearing his black-masked magician costume at a Creative Cupcakes birthday party and then tries to saw her in half. He draws closer while helping Rachel devise promotion plans to outsmart the arrogant new French pastry chef threatening to put the shop out of business. When a rat runs through the middle of her glitzy promo party and the video is uploaded to YouTube, Rachel fears she won't be able to save the shop, help her mother pay for her grandfather's medical treatment, or win back the heart of the one guy she's come to love . . . or will she?
Avon Romance / Amazon / Barnes and Noble 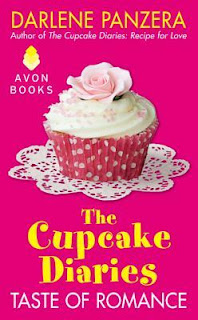 The Cupcake Diaries Book Three: TASTE OF ROMANCE
(Avon Impulse; on-sale May 21st, 2013; e-book ISBN: 9780062242839)
For fans of Debbie Macomber comes Taste of Romance, the third installment in the Cupcake Diaries series. Kimberly Burke has avoided all types of risk since her mother's deadly plane crash—including risky relationships. Seems like everyone is always leaving her behind: her ex-boyfriend, her mother, and now her sister Andi and best friend Rachel—who have each found the man of her dreams. Then she meets Nathaniel when she mistakes his backyard for the new community park. He loves her passion, and when he learns of her wistful desire to travel, he takes her up in a hot air balloon, hoping to overcome her fear of flying so that she can accompany him abroad. But before he leaves, they must catch the Cupcake Bandit and replace the money stolen from Creative Cupcakes before the shop is shut down. Will discovering the thief's identity persuade Kim to take a risk on love ... or will she stay behind and let Nathaniel fly off without her?
Avon Romance / Amazon / Barnes and Noble

Darlene Panzera is the winner of the “Make Your Dreams Come True” contest sponsored by Avon Books. The win led her novella, The Bet, to be published with Debbie Macomber’s Family Affair. The award-winning novella (chosen in a blind-read by Debbie Macomber) was then published as a full length novel retitled, Bet You’ll Marry Me. Born and raised in New Jersey, Darlene is now a resident of the Pacific Northwest where she lives with her husband and three children. When not writing she enjoys spending time with her family, two horses, and loves: camping, hiking, photography, and lazy days at the lake.

Author Links
www.darlenepanzera.com
https://www.facebook.com/DarlenePanzera
@DarlenePanzera
https://twitter.com/DarlenePanzera
My Review;
These are 3 books that are the cutest, sweetest I have read in along time.  Three ladies who meet their man when they least expect it.  Rachel, Andi and Kim are the kind of people that you would want to be friends with. The author has made you feel as if you have known them all your life.    They must catch the Cupcake Bandit and get on with their lives. The question is, "Can they do it?"  I give these books a 5/5 and I enjoyed all of them.  I was given these books for the purpose of a review and all opinions are 100% my own.
Posted by 3 Partners in Shopping at 2:52 AM