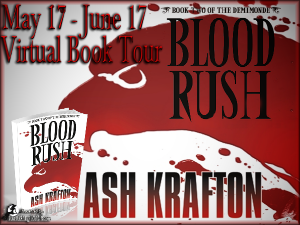 The Books of the Demimonde, Book 2
Ash Krafton

Sophie doesn't believe in happily ever after. These days, she'd settle for alive after sunrise.

Advice columnist and newly-appointed oracle to the demivampire, Sophie Galen has more issues than a Cosmo collection: a new mentor with a mean streak, a werewolf stalker she can't shake, and a relationship with her ex's family that redefines the term complicated. And then there's her ex himself, who is more interested in playing leader of the vampire pack than in his own salvation.

Becoming a better oracle is tough enough, but when Sophie encounters a deadly enemy - one she never dreamed of facing - it will take everything she's ever learned in order to survive.

I don't believe in happily ever after. These days, I'd settle for alive until sunrise.

While I waited for the elevator to arrive at The Mag's foyer, I smoothed my scarf along the back of my neck and hefted my tote bag a little higher on my shoulder. Every chime increased my trepidation, tightening the fist of anxiety in my chest and the sensation of bees swarming in the top of my stomach. I hated quitting time.
More underappreciated irony. Why not?

People chatted around me but I fidgeted with my zipper, keeping my gaze lowered and my mouth closed. Leaving at five in the afternoon meant more than crammed elevators and crowded buses; it meant the light would fade soon and with it my peace of mind. The autumn wasn't a happy golden foliage time of year for me anymore.

Although it was only early October, already the longer nights and shorter days made me feel nervous and brittle. Bad enough I didn't have a sweetheart to share the long nights but even worse now that I knew what came out when the sun went down. Although I hadn't had any problems with vampires over the last year, the threat never left my mind.

Vampires were out there. It was just a matter of time until I had to deal with them again.

Halfway during our descent, I felt a vibe. It was a mild one but, over the past year, my empathy had become sensitive to the point of being squirrely. The thin thread of power wound its way around each of the passengers as the DV who owned it checked out who else was in the car. When it reached me, it felt like a poke on the arm. I glanced over my shoulder, catching the eyes of an older dark-eyed woman near the back. She sent a tiny pulse of apology-ladened power and lowered her eyes.

I smiled politely and concentrated on tugging my scarf loose. The DV didn't approach me in public where any old human could see. We kept our dealings distant and private. That was the way I preferred.

The door opened and I flowed out with the crowd, sunglasses on and scarf over my hair. I hoped everyone would more or less continue on together today so I could hide in the crowd a bit longer.

Without turning my head, I saw a rail-thin guy, his scruffy head and jeans out of place amongst the exiting office employees. He leaned against the wall, scanning the people emerging from the other elevators. Seemed to have missed me—good. Taking shelter behind a taller woman and her chatty companion, I hustled out the front doors.
Outside, my luck ran out. My camouflaging crowd of co-workers suddenly scattered like roaches when the kitchen light is turned on. I hesitated, taking too long to pick a direction.

It was all he needed to spot me. I looked back through the glass into the foyer of The Mag's building. He was on the move, eyes locked onto me.

Startled faces blurred past as I hurried through the five o'clock exodus, bumping into one man, dodging another, and rounding the corner at a speed unfitting for heeled pumps. Steve Madden would be horrified if he knew what I did in his shoes.

Well, Steve could kill me later. Right now, I was facing a much more immediate threat.

At the corner, a bus was loading and at this point I didn't care if it was mine or not. An elderly lady with a big shopping bag struggled on the steps and I danced behind her like a first grader with a full bladder. Once she cleared the last step I leapt up, slamming my token into the fare box.

The door closed behind me just as my pursuer caught up. For once I was glad for the driver's rude efficiency. The bus leveled and lurched forward. I grabbed the bar, almost swinging into the laps of the front seat passengers. As we pulled away from the curb, I met the man's stare through the grimy glass of the door.

I sank onto an empty seat, heart thumping, gradually slowing. Glancing up at the sign over the driver's seat, I realized I'd ended up on the round-about route. Close enough for me. I tugged my necklace out of my shirt and kissed the pendant, my good luck charm, and offered a silent thankful thought to whatever divine powers had saved my behind, yet again.

Reaching into my bag, I pulled out a book of poetry and readied for a long ride home. Ironically, when I'd flipped to a random page, I opened to one of Dylan Thomas's poems.

Do not go gentle into that good night. Rage, rage against the dying of the light.
I had no energy left for rage. All I could muster was a thankful thought because at least today's escape had gone better than most.

About the Author:
Ash Krafton writes from the heart…of the coal region, that is.
She is the author of the Books of the Demimonde (Pink Narcissus Press).

BLEEDING HEARTS (Demimonde #1) is a six-time RWA finalist and was voted "Reviewer Top Pick" by Gravetells.com. Ash continues the story of Sophie and her Demivampires in her latest release BLOOD RUSH (Demimonde #2). She's hard at work (when she isn't watching Doctor Who) writing the third book, WOLF'S BANE.

Ash Krafton's poetry and short fiction has appeared in several journals, including Niteblade, Bete Noire, , and Silver Blade. She's a member of Pennwriters, RWA, and Maryland Writers Association. She lurks near her blog and contributes to the QueryTracker blog.

Ash lives with her family and their German Shepherd dog deep in the wilds, awaiting the day the TARDIS appears in the driveway (the dog most likely keeps the Doctor away. What a beast.)

Until then, she writes.