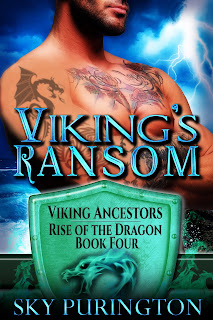 Kenzie is determined to be there for her sisters no matter what it takes. Even if it means giving herself over to her fated mate, Viking Eirik Sigdir. When she ends up traveling through time to tenth century Scandinavia, she’s ready for whatever comes her way. Until a chance encounter with Hel, the Goddess of Helheim, who has long loved Eirik.

Having recognized Kenzie from the moment he saw her picture in the twenty-first century, Eirik realizes the time has finally come. A secret close to the heart is about to be revealed, and the stunning red-head is the only person capable of protecting what matters to him most.

Unfortunately, Hel has already stolen Kenzie away. Now he needs to convince the goddess to give him back his bargaining chip because of a little-known prophecy. One that foretells he must offer up the woman he loves as ransom to get back what has been taken from him.

“We can return to the others now,” she murmured, well aware he had brought her here to make sure she was really okay. To be a sounding board if she needed one. She was doing all right though. In truth, she would just as soon stay here simply to spend time alone with him. But not if he thought he had to make her feel better the whole time. “I know your heart’s in the right place, but I don’t need coddling.”
“I know you do not.” He stroked her hair then inhaled its scent. “I just wanted to show you something…and be alone together.”
Glad they were on the same page, she inhaled his scent just as deeply, amazed by how much she was into him. Thrilled by the sensation. Addicted to it almost. She had never wanted to be in a man’s arms so much. Against him. Touching him.
“Come,” he whispered before he pulled her after him along the river to a stream that branched off and ran beneath a thick intricately carved stone archway.
“That definitely looks manmade,” she remarked, caught by the stunning beauty of the area. Moss caked rocks lined the stream and delicate roots from sparkling silver trees draped down into the water as if long, enchanted hair caught in the moonlight. It was all so eye-catching, she found herself walking forward without much thought as to where she was going.
“Why does this place look so familiar?” she whispered, smiling as she saw the entranceway between the roots to a dark but tempting pool of water directly beneath the archway. “It’s a whirlpool of sorts, isn’t it?”
“Yes,” he said, joining her. “Though this stream is one of many in the area, this location seems more caught up in the Realm’s oddities.”
“What do you mean?” she murmured, eying a small but lush bed of green grass nestled beside the whirlpool. Before he could respond, her eyes were drawn specifically to the compelling swirl of water, and she suddenly understood. “The water’s different here isn’t it?”
“Yes,” he replied. “Like a few bodies of water in the Realm, it goes against the laws of gravity, but there is even more to it…”
“My God,” she whispered, interrupting him as she figured it out. She began removing her clothes, compelled to go in. To be part of all this. “It flows both upstream and downstream at the same time.”
Yet she knew he had been about to say even more. That he was going to speak of the inherent magic of this place. Because its pure enchantment was undeniable.
“It does flow both ways,” he confirmed, as he began undressing as well.
Her gaze remained locked on the whirlpool as she waded in. It drew her in a way that brought unexplainable joy to her heart. Oh, how she wanted to immerse herself in it.
Remember it.
“That makes no sense,” she murmured. “Why would I want to remember it when I’ve never been here before?” She stopped and glanced over her shoulder at Eirik, suddenly certain this place was more than familiar to him and not because he had visited it lately. “It makes sense to you though, doesn’t it?”
“It does,” he confirmed, his eyes never leaving hers. “It did the moment I first discovered it.”
A delicious, life-altering sort of chill washed over her as their eyes held. “Why?” She swept her eyes over the area then looked at him again. “What does this place have to do with us, Eirik?”


“Everything,” he said softly, pulling off the last of his clothes before he joined her. “It has to considering this is where we were the first time I dreamt of you years ago.”

Sky Purington is the bestselling author of over forty novels and novellas. A New Englander born and bred who recently moved to Virginia, Sky was raised hearing stories of folklore, myth, and legend. When combined with a love for history, romance, and time-travel, elements from the stories of her youth found release in her books. 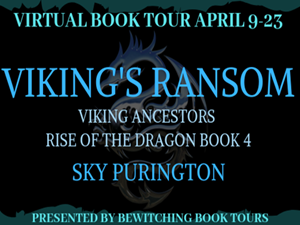