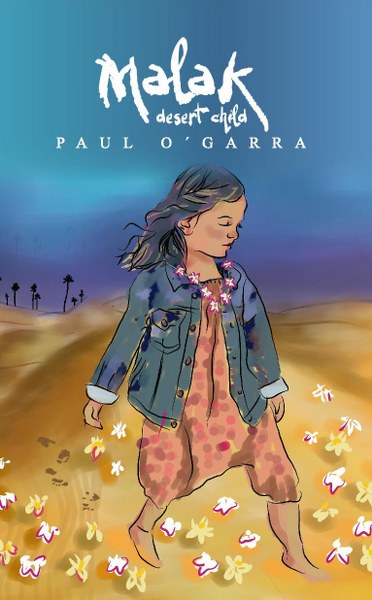 The first time I saw her she melted the ice in my soul.
Malak is a tiny beautiful five-year-old girl child. She lives in a cave in dire poverty with her drunkard father and her Saharoui mother and sister. Her enemies are all the towns children who victimize her and her sister because of their race and condition. Her only friend is a single mother named Latifa, and Malak´s grandmother Jeeda Hazzah who dies of cancer.
But Malak is the champion of her family against a violent father and the children of the Zoco who she fights singlehandedly. This is a magical and often mystical story of a young girl and the people she stumbles upon, as she is rushed away by her uncertain destiny, to the land in which her mother was born, the Sahara Desert. The unravelling of Malak's story is also the unsnarling of the web of intrigue surrounding the North of Africa, and it´s peoples and history, and the reasons for many current dilemmas in this land of witchcraft and mystery.
The tale begins in earnest when a wandering ex-warrior happens on the child and is struck by her magnificent courage and beauty. After a significant episode with her drunken father and his cronies, having interceded on the family´s behalf, he flees with them on a stolen high-speed cruiser heading for Western Sahara and freedom. In the course of their errant journey, they are taken into threatening custody by the Algerian police. Malak´s personality and mystic nature make of her the flux in an adventure which begins as a race to return her to her maternal grandfather´s family. A flight of mercy will become a race against time as Malak and her friends take on the impossible. In this, they enlist the help of many tribespeople. Some tribes known to all and others lost in the wastes of the mysterious desert and the annals of history.The story comes to an emotional and pent up conclusion in the least expected possible fashion.

**read as a standalone**

Paul O´Garra was born in Gibraltar on the 8th May 1952. Paul and his three siblings were the children of schoolteachers and were reared with English discipline, immersed in romantic literature on the one hand, and a large local family of uncles, aunts, cousins and a doting grandmother, who was Spanish from Cadiz, on the other.
Childhood was spent roaming across the Up South, Rosia, and Europa point areas of Gibraltar engaging in childish games and adventures, reading extensively books such as Enid Blyton’ adventure series, ‘Famous Five,’ ‘Secret Seven,’ ‘Swallows and Amazons Forever,’ John Buchan and the ‘Gorbals Die-hards.’ Saturday mornings were a day for avoiding the displeased grimaces of monocled and overweight colonels, delving and searching through the shelves of the old Garrison library to discover new horizons, characters, and stories. The journey of discovery that had begun with Baba the Elephant eventually began to grow richer as the classics were devoured.
In 1967, he looked on as fellow students of Jewish persuasion prepare to leave for Tel Aviv to defend Israel. Shortly after, the arrival of General Moshe Dayan at the gates of Cairo, signaled to the world that Israel´s direst moment had been overcome. Paul, at the earliest time possible, set off in a steamer from Tangiers, sailing to Southampton. After a spell in London, he left the UK to discover his roots in Malta. He alternated callings as a tour guide of Morocco and recoverer of broken down rented cars in the desert, tour guide of south Spain and eventually running a flamenco club on the Costa del Sol, in the days when the Costa was still a new and exciting place to visit.
Eventually, he set off again to discover new places in the Middle, the Far East and the Philippines, and when Perestroika and Glasnost finally arrived at the hands of Mihail Gorbacheff and the Soviet Union was open, set off to discover the East there. He studied Russian at St Petersburg and spent time travelling to the Republic of Udmurtia, Kazan, Siberia and up an uncharted river to meet Tribes that still lived in the area. Later to Nizhny Novgorod and the South Volga, then to the Ukraine travelling from city to city, falling more and more in love with the great Russian writers and painters as he went. Seventeen years ago at the age of fifty, Paul contracted renal cancer. He was operated on successfully at the Bullfighters Hospital in Pamplona in North Spain. Metastasis was practically impossible the surgeons happily reported. Two years later the cancer metastasised to his lungs on which he was duly operated, and half of his lungs were removed. Later for reasons undefined he suffered strokes in both eyes and lost partial sight in one eye and total in the left which he duly recovered by swimming and praying. Seventeen years have gone by since the renal cancer was first discovered, and seven years since his last operation and everything is fine, remission seems to be total.
Paul’s still swims at least one or two kilometres per day all year round, travels, practises martial arts and fervently believes that the Lord leads him by the hand. After leaving the hospital he spent some time in Tangiers, hairless, gaunt and on crutches, but enjoying the warmth and affection of many new friends there. Then off to Prague to study filmmaking, made several shorts but finally decided that he would first write and then make movies when the time came.