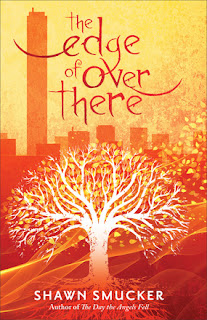 The captivating sequel to the award-winning The Day the Angels Fell***************************Abra Miller carries a secret and a responsibility she never expected.Before the Tree of Life, everything in Abra Miller's life had been predictable. Safe. Normal. But after the Tree, everything has felt fragile . . . like holding a soap bubble in the palm of her hand. After years of fruitless searching for the next Tree, she begins to wonder if it was nothing more than a vivid dream.Now sixteen, Abra finds a clue to the whereabouts of the next Tree of Life when an ominous woman--who looks exactly like a ghost from her past--compels her to travel to New Orleans where she'll find one of seven gateways between this world and Over There. But she's not the only one interested in finding the gateway. There's also a young man searching for his father and sister, who escaped through it years before. As Abra enters the Edge of Over There and begins her pursuit of the Tree once more, she doesn't know whom to fear or whom to trust. She's also starting to think that some doorways should never be opened.Praise for The Day the Angels Fell"Neil Gaiman meets Madeleine L'Engle. I read it in two days!"--Anne Bogel, Modern Mrs. Darcy"Shawn Smucker enchants with a deftly woven tale of mystery and magic that will leave you not only spellbound but wanting more."--Billy Coffey, author of There Will Be Stars"The otherworldly and the mundane collide in Shawn Smucker's The Day the Angels Fell, a humanizing tale of cosmic proportions."--Foreword Reviews"Unique, supernatural, and a twist on a tale we have all heard!"--WriteReadLife.com"The Day the Angels Fell has a nostalgic feel that reminded me of Ray Bradbury's works."--Ashlee Cowles, author of Beneath Wandering Stars and Below Northern LightsShawn Smucker is the author of The Day the Angels Fell, as well as the memoir Once We Were Strangers. He lives with his wife and six children in Lancaster, Pennsylvania. www.shawnsmucker.com
My review;

Author Shawn Smucker has written another exciting story called "The Edge of Over There". This is the next part in the story which stated with the book called "The Day the Angels Fell". Abra Miller is a young person who just wants to live her life. She has been searching for a long time for the next tree. But, she cannot find it. Does it really exist? Now she is 16 and her world is turned upside down. She is sent to New Orleans to look for the next tree, but there are others doing the same. Who will be first? Is it safe? I give this book a 5/5. I was given this book for a review by Revell Reads and all opinions are mine.
Posted by 3 Partners in Shopping at 8:26 PM