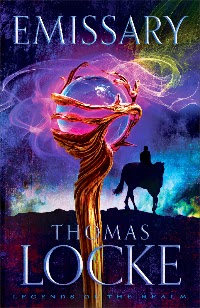 With his twenty-first birthday, Hyam begins a journey that will lead him to his destiny--or his doom.

Hyam has always shown a remarkable ability to master languages, even those left unspoken for a thousand years. But now the shadow of suspicion that was cast upon him as a child prodigy at Long Hall is lengthening, and he must keep his identity hidden--or face annihilation.

As Hyam's mother slips toward death, she implores him to return to Long Hall before he settles down to farm his land. This journey born from duty becomes an impassioned quest for the truth. War is coming swiftly, and Hyam must rely upon his newfound powers and the friends he meets along the way in order to unravel the puzzling past and ensure that he--and the realm--will have a future.


In a world where magic has been outlawed for centuries, one young man discovers that he possesses powers beyond his wildest dreams.

But he does not realize how pivotal this gift will be in the days to come.

Except for the healing arts, magicking is a punishable offense in the realm. The only places it is still practiced are the Long Halls scattered throughout the land--isolated haunts of wizards called mages and their long-suffering students.

But hidden rivers of power course deep beneath the earth, and not everyone has obeyed the edict banning magic. Vixens lie in wait on the Galwyn road. A mysterious race of telepaths comes and goes invisibly. It is even rumored that Elves still hide among the wizened trees. And somewhere beyond the badlands, a growing menace threatens the hard-won peace of the realm.

This young man could stem the ominous tide . . . but only by turning away from everyone and everything he has ever known. And facing dangers he cannot fathom.


Thomas Locke is a pseudonym for Davis Bunn, the award-winning novelist with total worldwide sales of seven million copies. His work has been published in twenty languages, and critical acclaim includes four Christy Awards for excellence in fiction. He divides his time between Oxford and Florida and holds a lifelong passion for speculative stories. Davis's screenplay adaptation of Emissary is currently under development as a feature film with a British production company. Learn more at www.tlocke.com.

I just finished reading , "Emissary" and I found it very interesting. It is the kind of book that makes you stop and think about what could happen if some things that have been made a crime, were to be found and used again, and  what could really happen. I  liked the storyline and I  the way that the character reacted to his new obstacles before him. Hyam has a huge new road to follow and it is something that he could never even have imagined. I give this book a 4/5. I was given this book by Revell Publishing and all opinions a re my own.
Posted by 3 Partners in Shopping at 8:53 PM