A Sealed Fate by Lisa Gordon A Book Review

A Sealed Fate by Lisa Gordon is a story about two women who are testing their fate and the rest of their life. Larissa is an astrologer who tells Valda that a Sheikh and her destinies were sealed together from the day that they first met. Valda then asks Larissa  for help and they work together, even though Larissa has not told Valda all that she really saw in the charts.  Their question was can you change fate and your destiny? 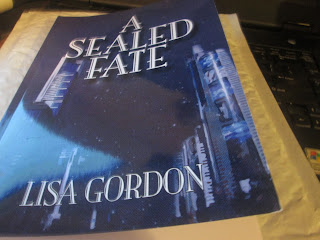 The story takes place in beautiful Dubai and you can almost think and feel that you are there. This is a thriller that is fast and a quick story. I was not able to put it down until I was finished.  I was totally surprised by the ending, but I think that I understood it. I was given this book by the author but all opinions are 100% my own.
Posted by 3 Partners in Shopping at 5:09 PM