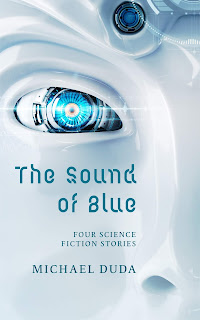 Tagline:  The Sound of Blue takes you on four journeys of alien discovery

The story “The Sound of Blue” was awarded Silver Honorable Mention by Writers of the Future, Q2 2019.

Aliens exist everywhere. They are android. They hide within the mind. They live on other planets. And they can even travel the universe using technology far beyond our understanding.

Markey VI, an android on an orbiting space station, assists an artificial intelligence. David, the A.I., ponders the question of humanity’s fate. The ultimate question is, “Should life be returned to Earth?” The answer is known as the Singular Conclusion. But the answer’s impact reaches far deeper into Markey VI’s electronic components and programmed logic than could be anticipated. And the android’s final moments bring it closer to humanity itself.

David Grayson volunteered for a project called, ‘Threading.’ Unfortunately, Threading slowly alters David’s mind. And it affects the other two subjects. But in what way? After the final test goes wrong, David unleashes a powerful ability capable of distorting time.

Shiran accuses Abian of murdering her husband. She claims that Abian tells lies about the events leading to the death. She also keeps a secret that could reveal the truth. When Abian uncovers Shiran’s secret, Shiran discovers that there is more to her simple village life than she first believed.

The Sound of Blue takes you on four journeys of alien discovery. A journey just out of atmospheric reach. To a mysterious planet and at the far end of a galaxy. And into the mind where superhuman powers wait to be untapped.

Excerpt:
Holding a modified acoustic guitar, Markey VI sat down in a chair facing the space station’s observatory window. There were no distracting sounds inside the room. Only a low frequency hum could be detected nearby.
Skin sensors indicated that the observatory maintained a constant 72 degrees Fahrenheit. It was an optimal temperature for the operation of so many telemetry electronic assemblies that covered the walls to the left and right. This temperature would also be suitable for the transmission of sound waves.
David continued to argue for the purpose of suspended chords being played on the guitar. Or any instrument. To Markey VI, the guitar was a straight forward procedure.
“Suspension of chords is more than just playing music in time,” David said.
“And what other purpose do they serve?” Markey VI asked.
“It’s about tension, then prolonging the tension. It keeps humans listening, excited, wanting more. Geez, what do androids know?”
“But you are an artificial intelligence. You can only predict how a human might react. How would tension benefit you?”
“You forget I was once human. And your creator.”
This answer was illogical. The subtleties of being human were both inefficient and unnecessarily complicated. The A.I.’s responses indicated a potential reset of its system.
“Should I play for you?” Markey VI said.
“Yes. It helps me think.”
Markey VI positioned artificial hands over the guitar’s fretboard and bridge. David remained silent, working on the Singular Conclusion.
This was the ninth iteration of David’s A.I. During each new iteration, he attempted to once again resolve humanity’s fate. The question, Should life be returned to Earth? did not have a straightforward solution.
When this new iteration had begun, David had told Markey VI that the process was not to be taken lightly. It was like playing the role of Grand Creator. He had said that he was responsible for granting new generations of people a second chance, if they were worthy. And that was a matter of predicting behavioral outcomes in multiple scenarios. Markey VI had offered no response.
But David’s recent prediction efforts were now being interrupted by a second question. Had humanity all been an unfortunate accident? If David could not come to a satisfactory resolution soon, there would be another A.I. reset. And a tenth iteration of David would once again work at resolving the ultimate and final question.
“David, I will begin playing.”
“Look down below us and use real images to inspire you.”
From the observatory’s vantage point, the orbiting space station could more easily monitor the Earth through electronic means. The lifeless planet could also be viewed from a distance. Markey VI’s synthetic eyes granted good magnification. But at approximately 250 miles above the surface, details of what existed below were still somewhat limited.
The station had just moved into the light side of Earth. Below, the unfocused image of the Atlantic Ocean ran along the coastal line of what had once been Spain.
“What is it that you see?” David asked.
“Blue. Along a craggy cliff.”
“What are the sounds of blue against a cliff? Play it as music.”
“I could select a work from my memory. Would this inspire you?”
“Surprise me.”
Markey VI processed this request and seconds later decided on Charles Trenet’s La Mer. Initiating a backing track, metal fingers moved flawlessly in rhythm and time over the guitar’s nylon strings. As each chord changed, just enough pressure was applied to harmonize with proper effect. And scales rang out notes in perfect pitch, a singular voice that complimented the progression of music.
When finished, the android asked if the work was played satisfactorily.
“I have made you as close to God as possible and yet you lack a soul,” David said.
“I do not understand.”
“You don’t play. You imitate.”
“I will stop.”
“Did you know that when La Mer was first performed, audiences dismissed the work?’”
“I did not mean to offend you by playing it.”
David made a laughing sound, his voice spreading out through the mounted speakers spread across the observatory.
“Markey VI, does the color blue mean anything to you? Anything?”
“It has a visible spectral wavelength of –“
“I’m talking about concrete images conjured by the senses. I can’t taste spectral abstractions. They don’t remind me of the woman that smelled like cherry blossoms, or a soft kiss like a cloud’s caress, and ocean waves that softly ebbed and flowed to our beating hearts.”
“My output data could be modeled after several physical parameters of the landscape below.”
The observatory speakers went silent. Only the humming of electronics could be detected.
For several minutes, the station moved further around its orbit. The ocean shifted away as rock and grass came into view. The tops of trees appeared in random numbers and groupings. Hills rose and fell in no particular design or fashion.
Markey VI reviewed photographs and paintings stored in internal memory. They were compared to the foliage below. There was no logical reason for why humans had artistically recreated so many images of these topographical irregularities.
Finally, David spoke again. “I’ve reached the Singular Conclusion.”
“Are we to abort Project Eden?”
“No. Your music has shown me today what I can never predict tomorrow. Without flaws, without irregularities, humanity has no meaning and no reason for hoping for something better.”
“Their flaws caused their own self-destruction.”
“The greatest of all accidents. But they lived a million times more than you ever can, Markey VI.”
Markey VI stood up and placed the guitar in its stand. Strings plinked as the instrument settled into a resting position. The final task would soon begin. The station would be taken out of orbit.
“I will initiate Project Eden. A new cycle of humanity will evolve,” Markey VI said.
“And hopefully it will resolve to something better.”
“And if it does not?”
“Then a future version of me will try to fix humanity’s flaws, only to realize the miserable accident of a perfect android.” 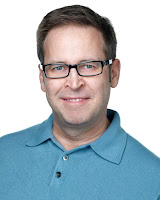 Michael is the author of several collections of short stories. Under pen name M. Duda, his titles include We Dream at Twilight and Whispers from the Grave.

His most recent story, "The Sound of Blue," won Silver Honorable Mention from Writers of the Future. This has fueled his passion for writing fiction.

He lives in Ohio with his wife, three dogs and two cats. He writes because his cat hates him.