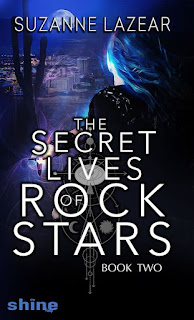 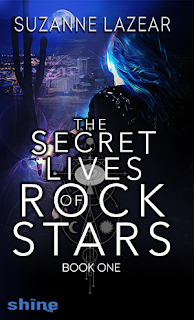 Summary:
Saving the world, one tour stop at a time.

Join Bitsy in the second installment of her attempts to stop a magical war threatening Arizona and all those who call it home. With the help of a human, a sexy dragon, and the members of her band, Bitsy must stop an angry mob of chaos demons before the band leaves for their next tour stop.

It’s nice to be needed, but Bitsy has no idea how to defeat the demons and she just might get herself killed trying. But then, at least one problem would be solved...

The Secret Lives of Rockstars Book One on Goodreads

About the Author
Suzanne Lazear spins tales of the fantastic. She’s the author of the New Adult Elfpunk The Secret Lives of Rockstars (Leap Books) and the YA dark fairytale steampunk series The Aether Chronicles (Flux). Suzanne lives in Southern California with her daughter and husband where she’s trying to make tiny dragons out of wool. One day she’ll actually create a working cupcake cannon.