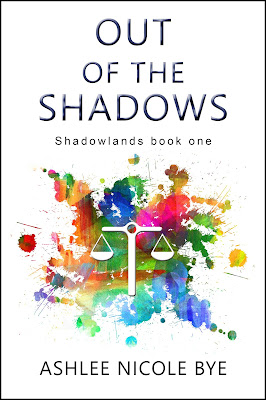 Out of the Shadows
by Ashlee Nicole Bye
Genre: YA Urban Fantasy
Release Date: April 2017

From the streets of Melbourne to the bowels of Westminster, the delicate balance between life and death that is so painstakingly maintained by the reapers of The Order of Dark and Light is being tested by the return of an ancient threat. Tensions are rising within the hidden world of The Shadowlands and if this threat is not contained war will be inevitable. And the destruction of the human world is bound to follow in its wake.

Amidst this tension, eighteen year-old Sachi Manning is struggling to cope with the grief and guilt that has plagued her ever since her best friend was murdered six months earlier—that is, until she spots him seemingly alive and well and being held at scythe point by a hooded figure who looks more like a GQ model than the Grim Reaper.

Sachi shouldn’t be able to see through the glamours that shield Shadowlanders from the human world, so the reaper in question wants some answers. And so begins the craziest couple of weeks of Sachi’s life as she is drawn into a world of mysteries, magic, monsters, and mayhem, encountering dragons, faeries, soul-sucking demons, not-so-grim reapers, and even the Horseman of Death.

With a mix of heart, humour and hair-raising action, Out of the Shadows is the adventure of an afterlifetime, perfect for fans of Cassandra Clare and Paula Weston.

Praise for Out of the Shadows

"...it's flawlessly written. Ashlee Nicole Bye really knows how to write a story. She has her own voice, the kind that pulls you in and really makes the world come to life." - Bibliophile Ramblings

"...new authors can either be a smack bang hit or disappointing miss- Ashlee Nicole Bye is definitely a big old hit! Being her first novel, her writing is beyond amazing and I cannot wait to see what else she comes up with! The pacing flows, the writing is descriptive but not overly so, the world is unique and the characters are amazing." - Bookishfix

"I loved Out of the Shadows. Sachi's world is amazingly complex, full of supernatural creatures, competing factions and a complicated process for managing what happens to souls when they die." - Cassandra Page, author of Isla's Inheritance

"This book was fantastic and promises to be a brilliant series. It is a delightful read full of page-turning action and intriguing characters with a hefty dose of humour. A feisty heroine, hot guys, demons, reapers...Out of the Shadows has it all!" - Cheryl, Goodreads reviewer

"...the entire concept of this sic-fi/fantasy world is on point. The description and the writing style make for an enjoyable, hard to put down read. I can't wait to see just what is in store for these characters." - Jennifer Leigh, author of Incognito

"How come no one knows about this book? It would be a best-seller if they did!" - Malissa, Goodreads reviewer

"One successful debut for Ashlee Nicole Bye! Truly succeeded in captivating me into the Shadowlands world. I loved this book and the characters even more." - Viridiana, Goodreads reviewer

Excerpt:
From chapter one:

As Julian studied the mangled remains of the boy who had once been Campbell Locke, it was easy to see how the humans could have mistaken the death for a homicide. The latest in a string of vicious murders by the now infamous ‘Melbourne Slasher’, who had plagued the streets of this city for near on three months now—or so the papers said.
The teenager’s throat had been slashed with what, to human eyes, looked like a knife. But Julian knew better—that wound was the result of an incredibly sharp claw.
Julian had positioned himself on a first floor window ledge not ten metres away from the crime scene. It was the perfect vantage point, or would have been had his legs not been cramping from the awkward crouching position he’d been forced to assume in order to balance his tall frame on the narrow ledge. The preternatural eyesight bestowed upon him almost a century and a half ago allowed Julian to make out every detail of the narrow alleyway: the ground a peculiar patchwork of cobbles, concrete, and bitumen; walls the brick exterior of low rise buildings whose original colour could not be determined through the layers of graffiti—some of which, Julian had to admit, was quite remarkable. There was a blue industrial rubbish bin set up against the wall of the nightclub that backed on to the alley, overflowing with black bags and glass bottles. Julian could feel the vibration of the heavy bass from the club’s music thrumming through the walls around him. The song was something modern, with a powerful female voice interweaving through a thumping dance beat. He couldn’t say what it was called—it all sounded so similar to him.
At the mouth of the alley, a row of uniformed police officers stood guard over the crime scene, sending any curious onlookers on their way. Julian was tempted to move closer. To walk right up to the crime scene and stand amongst the mingling investigators. After all, with his invisibility glamour in place no one would be able to see him.
But it was a risk he could not afford. He was well aware of how far crime scene technology had progressed since his time amongst humans. They had something called ‘forensics’ now, where scientists could track a killer using the smallest piece of evidence: a drop of blood, a strand of hair, even the tread of dirt from a foreign location. Julian frowned as he glanced at his boots, the soles of which were crusted with the remains of the faery he’d disposed of three hours earlier. These humans would be baffled enough as it were with the lack of evidence to be found at this scene, he didn’t think it wise to confuse them further with the presence of an otherworldly substance. Not to mention that the invisibility glamour was somehow affected by flash photography—he was not in the mood to explain to Lord Mortem why there had been a ‘ghost’ sighting at the most recent ‘murder’ scene.
An awareness brushed across Julian’s mind and he immediately looked up, scanning the rooftop opposite. It didn’t take long to spot Moss; he had his hood down and even without Julian’s superior vision, it would have been difficult for him to miss that mop of bleached dreadlocks contrasting starkly against the midnight sky.
Julian swept his gaze over the crime scene one last time before letting the ledge fall away from him. It was a split second of dark emptiness as he passed through the shadows, and then he was standing on the roof next to Moss.
‘Crazy night, dude,’ Moss said in his Floridian surfer drawl.
Julian ran his eyes over his friend. They had gone their separate ways tonight, and it was clear by the smears of blood over Moss’s face and the tear in his sleeve he’d had almost as interesting a night as Julian. Moss always looked slightly rumpled, though; unlike Julian, who, even after killing the banshee that had been about to take centre stage in front of twenty thousand humans under the guise of a popular musician, a passionate kiss of gratitude from said musician (whose memory Julian had, most unfortunately, been obligated to alter moments later), and crouching on the window ledge for a good two hours, was still as tidy and well-pressed as usual, not a hair out of place.
‘You could say that,’ Julian said. Though a hundred and forty years had passed, he still spoke with the same accent and manner he had cultivated during his life as the son of an English peer. He would have liked to believe there was little else from that life that remained, though he knew this was not the case.
‘So, this one makes three.’ An uncharacteristically sombre expression crossed Moss’s face. ‘Any ideas?’
Julian shook his head. ‘Something with claws—which narrows it down to at least a thousand Shadowlanders.’
‘It’s hot.’ Moss emphasised the statement by rubbing the back of his forearm over his sweat-streaked brow. It was indeed. The Australian summer was only a week away, and Melbourne had been hit with a blast of the kind of humidity usually reserved for the northern parts of the country. ‘That should rule out an Infernal creature, yeah?’
Julian frowned. ‘I think it would be foolish to rule anything out at this stage.’


Ashlee Nicole Bye is the author of the SHADOWLANDS series, the first book of which--OUT OF THE SHADOWS--was published in April 2017.


She was born and raised in the always amazing city of Melbourne, Australia. She's a total history geek, a book nerd (of course!), loves watching sport, and is just a little but obsessed with anything fantasy and science fiction related.

She's a doting auntie to three awesome little guys and the mum of a crazy fur baby, a Rhodesian Ridgeback puppy named Sadie. She's also vision impaired and writes all her stories with the help of Apple's awesome zoom commands and super-sized fonts.
Author Links: 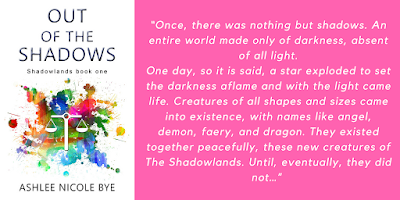