When the prince she was supposed to marry falls for someone else, Edeena Saleri is done with Garronia's courts, crowns, and family curses. She grabs her sisters and escapes to the nobility-free coast of South Carolina, USA.

Refuge isn't anything like it's supposed to be, however. The family's island vacation home now borders a singles' retreat, which Edeena's sisters embrace all too eagerly. Worse, the private protection firm Edeena hires is run by the most infuriating man she's ever met--a rough-hewn, dark-eyed, charismatic charmer named, of course, Prince. He's not a royal and he's nowhere near noble, so there's no way he can break the family curse. And yet...

Vincent "Prince" Rallis has spent his whole life justifying his name. The son of hardworking immigrant parents, he's hustled for every dime, finally building a personal security firm with the muscle and grit to live up to its promises. He's used to keeping his cool, but when the high-strung, high-class Edeena shuts him down despite her obvious interest, pride demands he fight for her--even if he has to track her back to her glittering court to prove his point. Only once Prince arrives in the seaside kingdom of Garronia, he finds his troubles are just beginning.

Sometimes love in Garronia can be magic. And sometimes you're just Cursed.

Someday… my prince will come…
But he could stow it for the moment.
Countess Edeena Saleri strode along the bright, cheerful corridors of the Charleston International Airport, slightly behind her sisters Caroline and Marguerite, half-disbelieving they’d finally made it. The six-thousand-mile flight from Garronia had taken nearly two months to arrange, every day fraught with anxiety that her father would realize that Edeena and her sisters weren’t merely heading off for a vacation, but attempting to create a beachhead from which at least two of them could start a whole new life.
A life that had nothing to do with the kingdom of Garronia—or any of its princely curses.
Now Edeena focused on her sisters as they chattered excitedly. They’d all agreed to only speak English from the moment they got on the plane for the final leg of their journey, headed for the United States. It wasn’t much of a hardship; the trio could speak Garronois, Greek, and English proficiently, and Caroline spoke a little French as well, mainly because there were so many French visitors to their little seaside kingdom. Marguerite had started and stopped a dozen different languages in college, as the mood struck her. Like most things for Marguerite, she could never settle specifically on one language that made her happy, so she simply chose not to choose.
But neither of her sisters would have to make any choices for a while, Edeena resolved. This journey would take them to their mother’s vacation home of Heron’s Point, one of the largest houses on Sea Haven Island, South Carolina, perfect for a getaway. In fact, they were just coming to the secured exit of the airport now, where waiting for them should be…
Edeena’s stride faltered, her heart jolting as her gaze connected with a pair of intense, laser-beam eyes from across the corridor. She recovered as smoothly as she could while her sisters exclaimed in delighted recognition of their family name, featured on the tablet held aloft by Laser-Beam’s partner.
The two men stood slightly apart from the others car service representatives. Though they were dressed in subdued dark suits, they seemed far more restless, more competent than their peers—they should, of course. They were more than limo drivers.
The shorter man smiled broadly at Edeena as she caught his eye, his dark bald head gleaming in the harsh fluorescent lights. Then his gaze locked on her sisters as if he was memorizing their stride, their faces, the very distance between them as they walked. Edeena forced herself to study him as well, though it had been the taller man who’d nearly bowled her over.
Was he Greek? He had to be Greek. But in South Carolina?
Regardless of his nationality, he looked Greek—as in Greek god, to be more specific. Tall, dark and ridiculously good looking, with all the confidence and charisma to go with it, the man was easily over six feet tall, with cropped tawny brown hair and bronzed skin, his muscular physique filling out his suit with impressive solidity. Dismay skated through Edeena as she took in his no-nonsense expression. She’d long prided herself on being able to overwhelm her staff, friends and colleagues by the sheer force of her personality. Frankly, she’d expected to be able to do the same with anyone sent by the security firm she’d hired to protect herself and her sisters while they vacationed in America. This man didn’t look easy to overwhelm, however. He looked like…
She stared at him a little longer.
Hot, she decided. He looked hot. 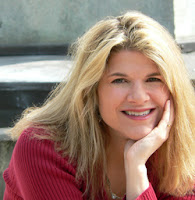 
Jennifer Chance is the award-winning author of the new adult Rule Breakers series as well as the contemporary romance modern royals Gowns & Crowns series. A lover of books, romance, and happily-ever-afters, she lives and writes in Ohio. In addition to her work in romance, she is also Jenn Stark, urban fantasy author of the Immortal Vegas series, and Jennifer McGowan, YA author of the Elizabethan spy series The Maids of Honor. She is truly NOT trying to become 27 Jennifers, but it's getting a little dicey.
Connect with Jennifer: Website | BookBub | Facebook | Twitter | Goodreads | Amazon