Summary from Goodreads:Two genetically altered dogs, two different fates. One is Robo, a beloved Great Dane, who is tricked out of the embrace of his human family and then is horribly altered by an evil scientist who rebuilds him with robotic parts, weaponizing the dog for money from the military. But that s not all the scientist does the experiments he conducts leave Robo a genius, almost immortal and with powers beyond explanation. But the horror Robo experiences at the scientist's hands changes him driving him insane with the sole mission to destroy all humans, especially those who have tortured and hurt dogs.

Meanwhile, a scrappy alley husky sits in a shelter, when she with her blue eyes and tough wolf-like features captures the attention of another group of scientists desperate to stop Robo from his path of destruction. This dog, called Blue, could be the chosen one to fight and defeat Robo. She is also genetically enhanced and left with glowing turquoise eyes before being released to face Robo s vicious dog army. Her mission: save human civilization and the packs of dogs she's grown to love. 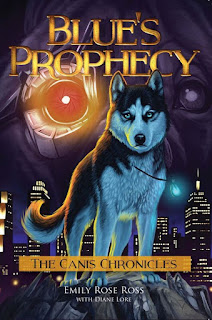 Article about the Author on AJC: http://www.myajc.com/lifestyles/sci-book-about-dogs-launches-cobb-year-old-career-author/sb0mV64hMbdgkehQUQpxtN/


Article about the Author on Vox Communications: http://voxatl.com/teen-novelist-emily-ross-writing-tips/


Emily Ross, 13, is a fifth generation writer and an owner of three dogs, Balta, Buddy and Zoey. Her prose exceeds her years, with Emily starting work on Blue's Prophecy, a science fiction/fantasy book for pre-teens and teens, when she was 10. Living in Atlanta, Emily is also an animator and a skilled archer, and relaxes by playing the double bass in her middle school orchestra.

Book Trailer: a Rafflecopter giveaway
Posted by 3 Partners in Shopping at 12:07 AM