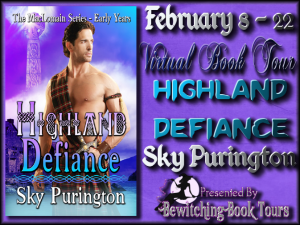 Amazon
Book Description:
Mildred, a young woman living in New England during the onset of World War II, worries about her family. What is to come? How will life change? Little does she anticipate change is to come not from war, but from an unexpected trip back in time to medieval Scotland.

Adlin, Chieftain of the MacLomain clan, will never forget the moment he lays eyes on her. Though he rules one of the most powerful clans in Scotland, Mildred redefines the man he thought he was. Her quick wit and perseverance humble his natural arrogance. Her sensuality cripples his defenses.

The maddened determination of a rival chieftain threatens their very existence. Caught together in time, they must find a way to evade the mighty MacLeods and keep peace in the Highlands. But lust, rage, and potential war simmer on the edge of their every move.

Will Mildred and Adlin find true love despite the odds? Find out in HIGHLAND DEFIANCE. 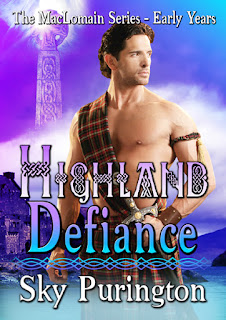 CLEAN EXCERPT:
I can handle this. I have to handle this! A dream is a dream after all; no matter if she thought she was going to work. No matter if she wondered at her sanity. So she decided to crack one eye open at a time.
Piece by piece, the man in front of her appeared.
He grinned. “Quite handsome, aren’t I?”
Her eyes popped open. Handsome? Extremely! His black hair was tousled, his startling light blue eyes merry, his chiseled face astounding.
“No,” she said automatically and buried her head again.
“Oh.” He plunked down beside her. “’Tis a thing sometimes, the shock of my good appearance.”
Mildred breathed deeply and hid her grin. Arrogant. But she couldn’t help but enjoy this dream. It was the first of its kind. She peeked out from beneath her arm and said, “You’re awfully full of yourself.”
“Nay.” He looked ahead and shook his head. “I stopped being that way years ago.”
Still from beneath her arm. “Being full of yourself?”
“Aye.” He leaned back and stretched out his legs. “Turns out the lassies dinnae like it.”
Mildred lifted her head slightly. “Why not? I find it rather becoming.”
“You would.”
“I would?”
“Of course.”
“Why is that?”
“Because you’re arrogant too.”
She sat up straighter. “Am not.”
“Are too.” He titled back his head. “Do you feel that?”
“What?” But she already did. A cool wind blew through the forest and brushed her cheek. For the first time since she’d arrived, Mildred looked around. There existed no steel mill looming in the distance waiting for her to make parts for planes created for war. There existed no stream of people trudging into a plant determined to do their job.
Her friends and siblings had vanished.
“Beautiful, isn’t it?”
Her eyes darted to the man beside her then back at the forest. “Yes, but I don’t understand.”
“Cannae you be happy with what is in front of you?”
She heard his accent and saw the forest and shook her head. “No, I can’t.”
“Too bad.” He jumped to his feet and held down his hand. “M’lady.”
Mildred looked up, still barely familiar with everything and shook her head. “No.”
He ignored her and pulled her to her feet. Stunned, she looked up…and up. It was then that she truly realized the stature of the man talking to her. With shoulders easily twice as wide as hers, a height at least eight inches taller and a frame rippled with muscles, he was overwhelming.
Her eyes drifted over his face. That face. One she’d dreamed of since she’d been a little girl. Perfectly proportioned, with a straight nose, square chin, and straight brows, it’d always been overly alluring.
And those eyes...like the clearest blue sky sharpened by sunlight.
“Well, what about my attire?”
Her eyes rounded. Yes, his attire was… amazing.
“You’re wearing a…” She glanced away and cinched her lips before looking at him again, brows up. “You’re wearing a skirt.” Mildred paused a minute to get her bearings in front of such a good looking fellow. But things must be said so she gathered her courage and looked him dead in the eye. “Are you aware that you wear a skirt?”
With a shocked look, he peered down and said, “It appears that I am!”
Mildred breathed deeply through her nostrils and nodded solemnly. “So I’m the first to tell you.”
He looked to the sky for guidance then into her eyes. “It seems you are.”
“Well, I’m sorry about that but honestly it’ll get you in trouble, even in my dream.” 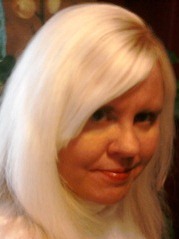 About the Author:
Sky is the best-selling author of seven novels and several novellas. A New Englander born and bred, Sky was raised hearing stories of folklore, myth and legend. When combined with a love for nature, romance and time-travel, elements from the stories of her youth found release in her books. Readers have described her work as "Refreshing" and "Unforgettable."