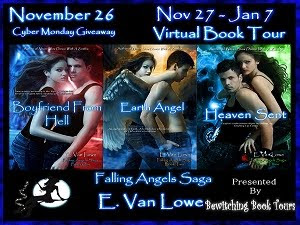 About The Author
E. Van Lowe is an author, television writer, screen-writer, playwright and producer who has worked on such TV shows as "The Cosby Show," "Even Stevens," and "Homeboys In Outer Space." He has been nominated for both an Emmy and an Academy Award. His first YA Paranormal novel, "Never Slow Dance With A Zombie," was a selection of The Scholastic Book Club, and a nominee for an American Library Association Award.  His Best Selling novels, “Boyfriend From Hell” and “Earth Angel,” are the first two books in the Falling Angels Saga.  “The Zombie Always Knocks Twice” is the first book in his Hollyweird series.

E lives in Beverly Hills California with his spouse, a werewolf, several zombies and a fairy godmother who grants him wishes from time-to-time.

Interview with Author E. Van Lowe
When did you first begin to realize that you wanted to be a writer?
The summer I became 10 years-old I came down with pneumonia.  I was a very active kid and my mother was looking for an activity to keep me occupied while I spent my summer indoors.  She knew I enjoyed entertaining friends and family with stories I made up.  She suggested I write some of them down.  And then she said the magic words: “You can make money doing it.”  That was all it took.  I became a writer that summer, and after a while I didn’t care about the money… which was a good thing.  LOL.
Do you like writing novels better than writing for television?
I get satisfaction out of both.  Writing novels gives me a special satisfaction because I get to spend more time with my characters.  With TV writing I get the satisfaction of seeing my work on TV.
Do you have a special place where you like to read?
Lately I’ve been doing most of my reading in bed at night.  Usually, however, I can read just about anywhere.  A few weeks ago we went to a movie and got there half an hour early.  I pulled out my iphone with the Kindle app and started reading.  You gotta love technology.
What was the first time you had something published?
I was first published a long time ago in college.  I had some poems accepted into a college magazine.  The best part of it was I didn’t submit the poems, a friend of mine did, so I had no clue about being in the magazine.  When people started congratulating me for being published I had no idea what they were talking about.  I got my hands on the magazine; what an awesome surprise.  Unfortunately, it was many, many years after that I first published a piece of fiction.
Do you also write for adults?  Do you have your own blog?
I began my career writing horror novels under the pseudonym Sal Conte.  I wrote a very popular novel, Child’s Play back in the 80s and followed with another fairly popular novel, The Power.  Sal is planning a big comeback.  He has a page on my website: Sal Conte's Page.  Yes, I have a blog. You can access my blog through my website.  http://evanlowe.com  You’ll see my blog listed in the pull-down menu.
Can you give others who want to write a small piece of advice?
The most important thing any would-be writer needs to do is complete several pieces of work.  You can’t be a writer without a body of work.  So try and finish everything you start.  No one finishes everything, but I find many would-be writers don’t finish anything.  Finish it—even if it stinks—finish it!

~~~~~~~~~~~~~~~~~~~~ ~~~~~~~~~~~~~~~~~~~~
My review;  this is the third book in this series about Megan Barnett who is 15 years old and is best friends with her mom Suze, who is a single parent. They are very close and share a bond together .  In the previous  book in this saga, Earth Angel, Megan is given a riddle in which she must find a message which has been hidden in the riddle. She has very little time to solve it as Satanists are forming a plan to make Megan find herself,  living in hell and losing the person who is most important to her. They and others will stop at nothing to help Satan win.  This is a fantastic book in the continuation of the first two in this saga. You should read all three,  both they also stand on their own as books that are captivating as well as fun to read. I loved the whole saga by this great author.  Boyfriend From Hell Book One,   Earth Angel Book Two,  and now Heaven Sent.
Posted by vicjbr at 6:59 PM