A Soul for Chaos by CRISTA MCHUGH Book Promo, Review and Giveaway 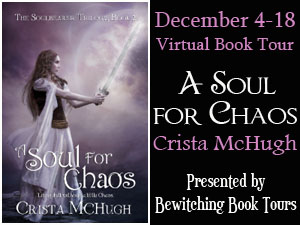 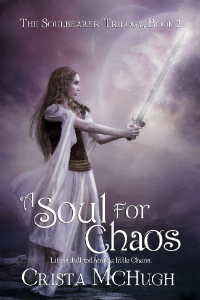 Book Description:
Book 2 of the Soulbearer Trilogy
Life is dull without a little Chaos.
Trouble is more than just a nickname for Arden Soulbearer. It seems to follow her wherever she goes. And no one knows this better than her protector, Devarius Tel’Brien.
Dev thought that by moving Arden to Gravaria so she could learn how to control Loku, the chaos god whose soul inhabits her body, life would be simpler. Wrong. Not only is he continually torn between his duty and his growing feelings for the Soulbearer, but he also has to contend with the rival prince who wishes to claim her heart. Adding to his problems, a group of powerful mages have banded together to rid the world of the disembodied chaos god once and for all. Of course, that means they have to destroy Arden in the process. 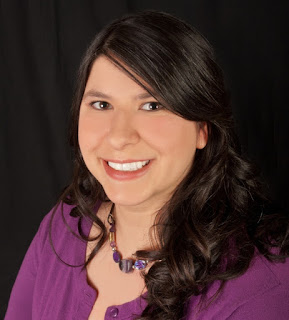 About the Author:
Growing up in small town Alabama, Crista relied on story-telling as a natural way for her to pass the time and keep her two younger sisters entertained. Of course, that also means she’s inclined to suffer some of the same maladies that plague many southern writers like overuse of simile and metaphor, exaggeration, melodramatic writing style, and the ever-popular long-winded sentence.
She currently lives in the Audi-filled suburbs of Seattle with her husband and two children, maintaining her alter ego of mild-mannered physician by day while she continues to pursue writing on nights and weekends.
Just for laughs, here are some of the jobs she’s had in the past to pay the bills: barista, bartender, sommelier, stagehand, actress, morgue attendant, and autopsy assistant.
And she’s also a recovering LARPer. (She blames it on her crazy college days)
For the latest updates and answers to any burning questions you have, please check out her webpage.
www.cristamchugh.com
Twitter: @crista_mchugh
www.facebook.com/cristamchugh
Goodreads: http://www.goodreads.com/author/show/3035791.Crista_McHugh

“What are you suggesting?” Jussip’s knuckles turned white as his grip tightened around his battle ax.
“She was a witch before she became infected with Loku. I wouldn’t be surprised if he’s stretching his influence over her in a different way. Instead of turning her mad like he did the others, perhaps he’s seducing her into becoming a willing servant. Loku didn’t open the portal to the Realm of Chaos without help from his followers.”

His threat had the desired effect. Doubt filled all of their eyes.

All except Ivis. She lifted her chin in defiance. “Your point is made. We should watch her as carefully as we have other Soulbearers in the past. Spring is near, and Sir Devarius will bring her here as quickly as he can. Once she is encased in the Mage’s Conclave, we will have ample opportunity to study Loku’s influence over her.”

The others nodded their heads in agreement, but Nelos curled his hand into a fist, banging it on the armrest of his chair. “We’ve only seen a glimpse of what she’s capable of doing, and look what she did to her home kingdom. She leveled the city walls of Trivinus. I say we strike now before she brings chaos to Gravaria.”

Ivis stood, her unwavering gaze fixed on him. “Would the God of Law sentence someone without having absolute confidence she has broken any laws?”

“She has broken laws, or have you forgotten magic is outlawed in Ranello?”

“But not here.” She moved to the center of the circle, turning slowly to speak to each of the priests and priestesses in turn. “We have little concrete information on this new Soulbearer other than the rumors that have made their way here. I urge all of you to pray to your deities for guidance on this matter, but do not act until we have all the facts. If she has managed to resist the madness thus far, then perhaps we have found the most powerful Soulbearer yet.”
She finally came to him. “Does that sound agreeable to you, Nelos?” I

Inside, he seethed. She had somehow managed to turn them all against him, to reduce them to cowards that would rather wait until the threat was on their soil before they struck.

“Patience, my servant. You do not need their help to dispose of Loku. I am all the power you need.”

His god’s word soothed him, and the red faded from his vision. “I will pray on the matter,” he replied in an even tone. And strike when he tells me to.
Review;
This is Book 2 in the Trilogy "A Soulbearer's Trilogy" .  We are continuing to learn more about Arden Soulbearer, who is also nicknamed Trouble, and whose body has been possessed by The God of Chaos, Loku. Luku has had to possess a mortal or his soul will also be lost. Arden is a witch who is not trained in how to use her powers yet, but Loku has decided he wants to stay in her body.
Dev who is Arden's protector has taken her to Gravaria, which is suppossed to be a safe place for her to start her training.  She has come to be torn between 2 men, Prince Kell. who has joined her and Dev as well. Dev has started to have feelings for her, but also has a duty to protect her. This book keeps you guessing on more than one thing. Who will Arden pick of the 2 men that she is torn between who both love her? Who are the ones that are  trying to destroy Arden?  Once you begin this trilogy you are hooked. It is full of action and mystery. There is also the decisions Arden has to make about love in her future. I cannot wait to read Book 3 in the Trilogy called  "A Soul for Vengeance", which will come out next year. I give this book 5 stars. All opinions are my own.
a Rafflecopter giveaway
Posted by vicjbr at 11:41 PM