I Know When You Are Going To Die by Michael J. Bower Virtual Book Tour and Giveaway 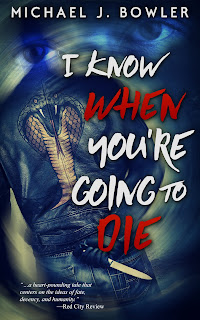 I Know When You’re Going To Die
Michael J. Bowler

Leonardo Cantrell is a painfully shy sixteen-year-old who cannot look people in the eye. One night while he’s volunteering at a homeless shelter, an old man forces eye contact and gives Leo the power to see Death.

His best, and only, friend—J.C. Rivera—thinks this new power is cool until Leo accidentally looks into J.C.’s eyes and “sees” his murder, a murder that will occur in less than two weeks. Stunned and shaken, the two boys sift through clues in Leo’s “vision” in a desperate effort to find the killer and stop him before he can strike.

Aided by feisty new-girl-at-school, Laura, the boys uncover evidence suggesting the identity of the murderer. However, their plan to trap the would-be killer goes horribly awry and reveals a truth that could kill them all.

The door to the dorm is open and I step in. It looks like a huge barn with a worn hardwood floor studded with row after row of folding cots. Since it’s dinnertime, all the cots are empty except one.
An old man with surprisingly alert eyes lies atop that cot staring at me. Most of the older people who frequent the shelter have rheumy eyes, always moist and often clouded, because they’ve struggled for so long on the street, and maybe because they have alcohol or drug problems.
“Come here, boy.” His voice is raspy and echoes faintly in the cavernous room.
At first, I don’t recognize him. True, there are hundreds of homeless on the streets every day, but I’ve been volunteering on Skid Row since I was fourteen and after almost three years, like I said, I know most of them. I’m  thinking  that if this guy is a regular, he’s passed under my radar.
And yet…
I have seen him, I think. Not here at the shelter. Walking to my car…?  Yes!  Several times over these past two or three weekends, I’ve noticed him.  He’s caught my eye because, every time, he’s stared at me so intently it made  me shiver. He’d be pretending to rummage through a dumpster, but his eyes would follow me until I got into my car. I confess his gaze made me uncom- fortable, but I let it go. I’ve learned to shrug off such creepy feelings because   so many of the people I meet down here have mental health issues.
I steel myself and walk between the rows of empty cots—each with its  neat bedroll awaiting an occupant—and stop before the stranger  with  the scary eyes. Unlike most of the people, his clothes aren’t especially dirty and he doesn’t smell like someone who’s been on the streets for a long time. Wisps of gray hair stick out from his head at haphazard angles and his face has so many wrinkles I don’t think I could count them if I tried.
I don’t make eye contact, but that’s because I never do. Not here, not anywhere. People tell me I’m the definition of “shy” and they’re right.
“You asked to see me, sir?” I say deferentially, my gaze on his gnarled hands.
He rolls over onto his back. “I been watching you, boy. Seen you on the streets a lot.”
I freeze. So, I didn’t imagine it! “Yeah?”
“Yeah.” The voice sounds like sandpaper scraping along a fence. “Rich boy like you helping out poor folk like me. What gives?”
I’ve been asked this question by all my relatives, so I’m ready with my answer. “I think people like me who are lucky to have a lot should help people who don’t. And I hope I’m making the world better instead of worse. The kids  I know just party and think about themselves all the time. I don’t want to be like that.”
A crooked smile cracks the wrinkled face. “You’re the one, all right.” “The one?”
With effort, he unclasps his hands with their swollen knuckles and holds his right arm out toward me. It shakes, like he barely has enough strength to keep it aloft. “Take my hand, boy.”
Unlike my best friend J.C., who never touches any of the people when he comes with me to the shelters, I usually have no worries about contact. But I hesitate this time. I mean, this guy has been watching me on the streets. But kindness makes me swallow my anxiety and I clasp his hand. He squeezes gently.
“Look into my eyes.”
Ordinarily, I’d just glance into his eyes and then look away. But that com- manding tone compels me. I raise my eyes and focus on his. They’re brown  and alert and they shimmer beneath the overhead lights. We  lock gazes, and     I stiffen. Something I can’t quite pin down swells within me, like a surge of emotion. I suddenly feel… different.
All the tension drains from his face in an instant. Relaxed, he releases my hand, pulling his arm back with great deliberation. He rests both hands across his stomach and gazes up at me with obvious gratitude.
“Thank you, boy. Now I can die.”
I shudder. “Wha-what do you mean?”
The man offers a gentle smile. “I gave you a great gift, boy. Or maybe a curse. Had it so long, I can’t be sure no more. But I couldn’t die till I passed it on.”
I stand frozen in place, my heart thumping, my breathing on hold. A gift?
A curse? “Uh, pass what on, sir?”
He chuckles and it’s a wheezy sound, like he doesn’t have much air in his lungs. “Just you calling an old bum like me “sir” proves you be the one.”
I feel different inside and his words scare me because I know he’s done
something to me. “I’m just a regular kid, sir. Nothing special.”
That chuckle erupts again, wheezier this time. “Oh, you’re more than a regular kid. Like you said, most kids only care about stupid crap like partying. You’ll  use my gift well.” He lapses into a coughing fit that scares me even  more.
“Want me to get some help?”
He waves away the idea with one hand. After a few moments, the hacking ceases. “No need. It’s  my time.” He suddenly looks really pasty and gray in   the face. “When you find someone worthy, boy, pass on the gift to them,” he whispers, his voice very soft and almost inaudible. He closes his eyes and lies still. “Until then, make wise choices.”


Then he stops breathing. Literally, just stops. One second his chest is ris- ing and falling and then the next, there’s nothing. I want to shake him back to life and ask a thousand questions, but instead I run from the room to get help.

Michael J. Bowler is an award-winning author who grew up in Northern California. He majored in English/Theatre at Santa Clara University, earned a master’s in film production from Loyola Marymount University, a teaching credential in English from LMU, and a master's in Special Education from Cal State University Dominguez Hills. Michael taught high school in Hawthorne, California, both in general education and to students with learning disabilities. When Michael is not writing, you can find him volunteering as a youth mentor with the Big Brothers Big Sisters program and raising his newly adopted son. He is a passionate advocate for the fair treatment of children and teens in California, and hopes his books can show young people they are not alone in their struggles. 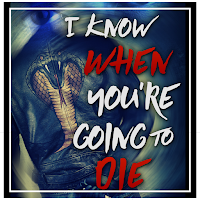 a Rafflecopter giveaway
Posted by 3 Partners in Shopping at 8:27 PM