Holding Out For A Hero by Maria Shield Virtual Book Tour 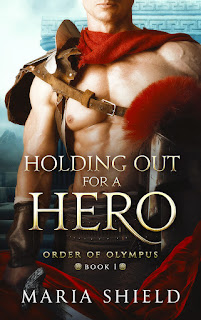 Tagline: She will face gods and monsters to save the man she loves.

A hero cursed by the gods…

Once one of the greatest heroes Ancient Greece had ever known, Argos is a far cry from the immortal warrior he used to be. After five hundred years of captivity, he is finally free—but a curse from a goddess has left him woefully mortal. In order to become a hero again, he’ll need the help of the gods and the seductive nymph who saved his life.

The only woman who can help him…

Claire Winters is definitely not a nymph, despite the assumptions of the half-naked man whose life she saved . Taking care of a delusional man while a storm rages is not what she planned – especially not as she gets ready to open her dream restaurant. She doesn’t have time for the tall tales of her handsome rescue. Yet, here she is.

When it turns out Argos’s claims are real, Claire finds herself thrown deep into a hidden and ancient world. Now, the two strangers must rely on each other to survive. Together they will face the gods, and the fiery attraction between them, as they work to reunite Argos with his ancient powers.

Will strength and wit be enough to protect them? Or will love prove to be the most powerful weapon of all?

HOLDING OUT FOR A HERO is the first novel in the ORDER OF OLYMPUS series. A sexy, action-packed romance series based on Greek Mythology and set in the modern world.

Excerpt 2:
Her eyes closed at the thought. The boat’s flooring warmed her summer-touched skin, and she hummed happily. The little things, Claire reminded herself. Life is about the little things.
A harsh scraping noise suddenly echoed through the boat, and Claire jumped to attention. She’d been around boats long enough to know that noise.
Sebastian had hit something.
Carefully she took in the water around her. She was anchored at least a couple miles south of her home at Edgewater. Nearly half a mile of water lay between her and the edge of Kent Island. No one was around.
Another harsh noise interrupted her observations, kicking Claire to her feet to investigate Sebastian’s sides. A look portside yielded nothing. She turned to peek over the starboard railing and froze. A small worn rowboat bumped anxiously against the side again. The structure was unlike anything she had ever seen before. The elegantly curved bow was made from a rich wood she didn’t recognize.
She didn’t pay the strange boat much attention after that. Her eyes focused instead on the body taking up its entire length. Muscular limbs stretched and dangled from one end to the other. It was a man, no doubt about that. Claire tried not to dwell on the scrap of cloth hanging around his waist and instead zoomed in on the rise and fall of his chest. From where she peeked down at him, he looked as if he was taking a late-afternoon nap.
“Hello,” she called. “Are you alright down there?”
No response, but he was breathing. That was a relief. His brazened skin looked dry, almost leathery, and his short, rapid breathing didn’t bode well for his overall health. A silver flask was clutched between his fingers, clearly empty from the precarious way it was held. The man had been out in the sun for far too long. Summers on the Chesapeake Bay could be humid, and any amount of time without proper hydration was dangerous.
The scruff along his chin and the length of his hair suggested only one thing—a castaway. Who knew how long he’d been floating in the waters with no help or food? That was a strange thought. The Bay wasn’t that big, and they were far enough north that someone should have spotted his boat. Concern overrode logic for now. The man needed help, and there would be time for questions later. She threw a rope ladder over the railing and prepared to board the small vessel.
Years of living in the city and the warnings of a paranoid mother urged her to stay cautious. As she grabbed two water bottles from her cooler, Claire also picked up the small pocketknife she had stashed under the steering wheel before tucking it into the back pocket of her khakis. She had never used the knife for anything but cutting rope and peeling the occasional apple. She hoped that didn’t change today, but just in case she reminded herself: stick him with the pointy end.
Poking her head back over the railing, the man was still where she’d left him, unmoving. The waves brushed the small rustic rowboat against her own. There was no choice. She scaled down the rope ladder and struggled to place her feet somewhere that wasn’t already taken up by bulging muscles. She wrapped the chain around the bow, successfully connecting the two boats and ensuring that the rowboat wouldn’t be wandering anywhere. Then she concentrated on the stranger. Getting him up the ladder and into shade was an impossible task on her own.
“Hey, wake up.” She brushed her fingertips along the closest part of his body, his bare legs. Her touch started as a gentle poke before shifting into a firm shake when he didn’t respond. Worry clawed up her throat at the idea that he might be seriously injured. She needed to get him awake and get water in him.
But the small boat barely had enough room for the two of them. Claire planted her feet on one side of him, but the waves threatened to send her into the water. Clenching her teeth, she searched for an alternative way to aid the man that didn’t have her fumbling over his naked body.
There was only one option.
“I’m sorry,” she whispered, gently straddling his upper body. His breathing didn’t waver under her weight. For a moment, Claire just took in the stranger. Besides the loincloth, the only thing on his body was a web of scars decorating his skin. One danced up his left pectoral muscle and over his shoulder; another sliced across his waist. Others were nothing more than light lines across his dark skin. A necklace made from braided thread with a dull gold coin settled along his collarbone. At least if he had any weapons on his person, he wouldn’t be able to hide them.
What are you talking about? said an awed voice in the back of her mind. Do you see his arms? If those guns aren’t weapons, I don’t know what is.
About the Author:

Maria Shield writes romance, and science fiction. She was raised in Kansas but has since lived all over the world, from Korea to Japan, finally ending up in her current location in Hawaii with her husband and pets. She is passionate about  Japanese culture, ancient history, and feminist activism.

She also loves helping other writers find their communities and sharing craft tips and tricks. This often means she's participating in a critique group somewhere or starting one herself.

When she isn't writing, Maria can often be found doing the 3 R's: Reading, Running, and Researching. 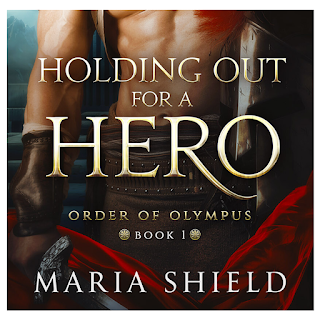