“Well, you didn’t have to answer so honestly,” I grumped. My sister Karin could be bossy.
A farmer wandered the pumpkin patch beneath a full, harvest moon, his curses floating on the warm, night air. He prodded a smashed rind with his boot.
Jaw clenched, I scanned the ruined field and jammed my phone into the apron of my French maid outfit. Hey, when you’re a real witch, there’s no point to dressing as something supernatural. Besides, Halloween night was supposed to be time for sexy fun with my boyfriend, Brayden, not for playing monster-cop.
My chest tightened. Brayden and I were solid. Totally. But I’d sort of missed our last two dates due to unforeseen magical circumstances, and Halloween was a special time for us. I couldn’t let him down again.
I plastered on a smile and waved to the farmer. “Did any pumpkins survive?”
“Damned kids!”
In other words, no.
My phone vibrated again. Ignoring the text, I knelt beside a tiny pumpkin the vandal had overlooked. I picked it up, brushed off the soil. Since I was an earth witch, plants liked me. I closed my eyes and focused on the pumpkin. Was there magic here?
“You! You! Stop!”
My head jerked up.
The farmer raced toward a scarecrow by the side of the dirt road. The scarecrow lifted its arms and smashed a pumpkin to the ground.
“Damn it.” It was magic. I leapt to my feet and sprinted toward the scarecrow. Was this a new trick? The local fairies animating scarecrows?
A shadow swept through the darkness in a clatter of hooves. Bells tinkling, a wagon flashed between us.
I skidded to a halt, teetering inches from the moving hayride, loaded with giggling kids and beaming parents and jingling harnesses.
The pumpkin split in my hand, and I jumped. My hair lifted at the nape of my neck. What the hell?
The hayride passed.
A shimmer of light flitted behind the scarecrow and vanished into the nearby woods.
I cocked my head and shivered. What was that? Dropping the pumpkin’s remains, I hurried forward.
The scarecrow slumped and dropped the pumpkin in her hands. And it was a her, a real her in a scarecrow outfit, and not, as I’d thought, a scarecrow come to life.
“What? Where am I?” She glared at me. “What did you do?”
“Nothing!” Typical. I always got blamed.
The farmer roared forward, arms swinging. The scarecrow sprinted away, which seemed like smart thinking.
I checked my phone and texted my sister.

Seriously. Crappiest pep talk ever. And where was I supposed to get iron?
The hayride clattered to a halt. Its driver helped the riders out and handed each a horseshoe.
Iron. I jogged to the wagon.
“Hey,” I said, chest heaving.
The driver smiled at my costume. “Hay is for horses.”
Yay. A comedian. “Can I have a horseshoe?”
“Did you buy a ticket?”
“Please, it’s super important.” That I make my date. Okay, and that I de-possess innocent Doyle-ites. Oh yeah, and send the stupid fairy back to wherever it came from.
“No ticket, no ride, no lucky horseshoe.”
“Fine,” I snapped and rummaged in my frilly apron for some bills. “How much—wait, are they real horseshoes? Iron horseshoes?”
“Sure.”
I handed over the money and got my shoe. “Perfect.” I raced into the oak forest.
The light dodged through a vineyard, between rows of twisted vines, and vanished behind a rise.
I jogged over the hill into another pumpkin patch.
A middle-aged woman in a plaid shirt, jeans, and vest hurled a pumpkin to the ground.
Aghast, I gaped at the wreckage. At least a quarter of the field was already destroyed, rinds and seeds and orange strings tangled on the ground.
“Catch!” I pitched the horseshoe at the woman.
She plucked it from the air and tossed it over her shoulder. The woman kicked a pumpkin.
Okay then. No on the iron. Or that guy had lied about the horseshoe.
My phone chimed, a gentle cascade of notes, and my insides fluttered. I didn’t need to check the screen. Brayden was the only person I knew who called instead of texting. He was old-fashioned that way. It was super cute.
The pumpkin in the woman’s raised hands exploded, raining down on her head. Her mouth opened, and the orb flew from her throat.
She stumbled and rubbed her forehead. “What…? My pumpkins! Who smashed my pumpkins?”
Keeping an eye on the wavering light, I answered the phone. “Hey there,” I said, trying for a low purr. But it’s hard to be sexy surrounded by smashed squash.
“Jayce.” Brayden’s voice rumbled. “Am I in the wrong spot?”
My belly heated, turning liquid. “Sorry. My bad. I’m on my way.”
He laughed softly. “I’ll wait. See you at Antoine’s.” He hung up.
The fairy light bobbed up a forest trail, along a stream.
I looked down the hill, where my F-150 was parked, and bit the inside of my cheek. If I ditched my fairy quest, I could be at Antoine’s in ten minutes.
The light vanished around a bend.
I swore and charged up the inky trail. But the blasted light kept ahead of me.
The trail changed, ribboning past cottages and a miniature red waterwheel.
I jogged up the stone steps from the creek to Main Street.
Across the road, a deflating bouncy castle marked the entrance to a pumpkin patch. Old Mrs. Biddlecreek raised her cane and brought it down on a pumpkin.
Frustrated, I glanced at my phone. It was nearly midnight. I was sweaty. My maid’s outfit was a wreck. Antoine’s, a small town bar, would be closing soon. I was so screwed.
How had I gotten stuck with fairy-removal duty? I didn’t know what I was doing. Iron was a bust. And I’d no idea why the fairy had left its first two hosts. Not because of me, that was for sure.
My phone pinged, and my muscles tensed. I really needed to choose a text tone that was more relaxing, like my chimes…
Chimes.
The first time the fairy had left, horses had trotted past, bells jingling. And the second time, Brayden had called, and my chime tones had rung.
Mrs. Biddlecreek whacked another pumpkin.
If I was going to get rid of the fairy for good, I needed bigger bells.
I scanned through cat videos, political screeds… “Ha!” I turned up the volume and thrust my phone toward the old lady. Winchester Cathedral’s bells bonged from my phone’s speaker.

The old woman clapped her hands to her ears. A ball of light flew from Mrs. Biddlecreek’s mouth. The light quivered, pulsing, then shrunk to nothing, popping out of our world’s existence.
The pumpkin patch exploded, pelting me with an orange mess.
“Augh!” I ducked, too late.
Mrs. Biddlecreek blinked and shook a pumpkin rind off her cane.
“Jayce?” Brayden, dressed like Zorro, strode down the sidewalk. Even beneath the black mask, I’d know his broad shoulders and confident stride anywhere.
Frantically, I brushed slimy orange from my maid’s outfit. “Brayden! You came looking for me?”
“Whoa.” He plucked a string of seeds from my hair, and his emerald eyes sparkled. “What happened?”
“It was sort of… uh… a magical problem.”
His handsome face creased. “Why didn’t you tell me? I was worried.”
I motioned toward the pumpkin patch. “I didn’t want to ruin your Halloween with... this.”
“Ruin?” He pulled me close, getting pumpkin on his silky white shirt. “All I want is to be part of your magic.” He kissed me, sending a shockwave through my body.
“Is that all?” I whispered.
He peeled another string of orange goo from my shoulder. “And get you into the shower.”
*****


Read about Jayce and her magical sister in The Witches of Doyle cozy mystery novels. Book 5, Fey, arrives on October 28th, just in time for Halloween! 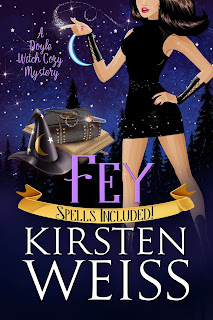 Tagline: This witch will do anything for a normal life with the man she loves. But when you’re on fairy patrol, normal is relative.

This witch will do anything for a normal life with the man she loves. But when you’re on fairy patrol, normal is relative.

Witch Jayce Bonheim has packed away her candles, crystals and cauldrons. With her boyfriend recovering from a hex, she’s determined to build a sane and magic-free life for them both.

But when a horde of troublemaking gnomes invades the small town of Doyle, it’s up to Jayce and her magical sisters to send them packing.

After the gnomes lead Jayce to a murdered employee from her own café, she’s plunged into an investigation that lands her in the sheriff’s crosshairs. And Jayce must catch a killer before the sheriff’s brewing witch hunt nets a very real witch.

Spells included at the back of the book.

Kirsten Weiss has never met a dessert she didn’t like, and her guilty pleasures are watching Ghost Whisperer re-runs and drinking red wine. The latter gives her heartburn, but she drinks it anyway.

Now based in San Mateo, CA, she writes genre-blending cozy mystery, supernatural and steampunk suspense, mixing her experiences and imagination to create vivid worlds of fun and enchantment.

If you like funny cozy mysteries, check out her Pie Town, Paranormal Museum and Wits’ End books. If you’re looking for some magic with your mystery, give the Witches of Doyle, Riga Hayworth and Rocky Bridges books a try. And if you like steampunk, the Sensibility Grey series might be for you.

Kirsten sends out original short stories of mystery and magic to her mailing list. If you’d like to get them delivered straight to your inbox, make sure to sign up for her newsletter at kirstenweiss.com

Feel free to follow her on Twitter @KirstenWeiss or Bookbub, get in touch on Facebook, post a picture of this book to Instagram and tag her @kirstenweissauthor, or send her an email. She’ll answer you personally…which may be a good or a bad thing, depending on your perspective.

a Rafflecopter giveaway
Posted by 3 Partners in Shopping at 10:46 PM