Everything She Didn't Say by Jane Kirkpatrick Book Review


Everything She Didn't Say by Jane Kirkpatrick 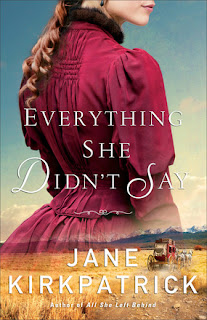 There is more than one way to tell a story . . . In 1911, Carrie Strahorn wrote a memoir sharing some of the most exciting events of twenty-five years of shaping the American West with her husband, railroad promoter and writer Robert Strahorn. Nearly ten years later, she's finally ready to reveal the secrets she hadn't told anyone--even herself.Certain that her writings will be found only after her death, Carrie confronts the pain and disappointment of the pioneering life with startling honesty. She explores the danger a woman faces of losing herself within a relationship with a strong-willed man. She reaches for the courage to accept her own worth. Most of all she wonders, Can she ever feel truly at home in this rootless life?New York Times bestselling author Jane Kirkpatrick draws out the emotions of living--the laughter and pain, the love and loss--to give us a window not only into the past but into our own conflicted hearts. Based on a true story.Praise for the Novels of Jane Kirkpatrick"Kirkpatrick does her research on each of her books, and it shows."--RT Book Reviews on All She Left Behind"Kirkpatrick's vivid, rich prose will keep readers in awe and on the edges of their seats."--Publishers Weekly, starred review of This Road We Traveled"Kirkpatrick's novel embodies a true pioneering spirit."--Booklist, starred review of This Road We TraveledJane Kirkpatrick is the New York Times and CBA bestselling and award-winning author of more than thirty books, including All She Left Behind, A Light in the Wilderness, The Memory Weaver, This Road We Traveled, and A Sweetness to the Soul, which won the prestigious Wrangler Award from the Western Heritage Center. Her works have won the WILLA Literary Award, USABestBooks Award, the Carol Award for Historical Fiction, and the 2016 Will Rogers Medallion A
My review;
Author Jane Kirkpatrick is one of my favorites. Her newest release "Everything She Didn't Say" is another great story. In this new novel she writes about the pioneers who shaped our new country. Carrie Strahorn is a young woman who goes with her new husband so that he can tell all about how great the railroad is going to be to them. You will find yourself laughing and crying right along with her as she comes to some realizations that everything might not as it seems. I would recommend this book to anyone who loves history and romance. I give this book a 5/5. I was given this book by Revell Publishing Company and all opinions are mine.

Praise for All She Left Behind"Once again, Jane Kirkpatrick creates a bold and inspiring woman out of the dust of history. All She Left Behind is a compelling story of Jennie Parrish, who triumphs over loss and tragedy to fulfill her dream of becoming a healer of both bodies and souls. With the help of her God and her husband, Jennie breaks the bonds that keep women from practicing medicine in nineteenth-century Oregon. Jennie's triumph, in the skilled hands of one of the West's most beloved writers, leaves its mark on your heart."--Sandra Dallas, New York Times bestselling author"Strong characters, exceptional settings, and a tender romance make this a story most readers will appreciate."--Library Journal"Kirkpatrick is an unwavering pillar in historical fiction, showcasing the power of her meticulously researched and richly rendered details."--Booklist"The storyline is rich in historical details that enhance the overall plot without overtaking it. Kirkpatrick does her research on each of her books, and it shows."--RT Book ReviewsPraise for This Road We Traveled"Dramatic and suspenseful, This Road We Traveled is an unforgettable story of hardship, survival, and the bonds of family, based on true events. Tabby's indomitable spirit proves that women, as well as men, helped to tame the West."--Suzanne Woods Fisher, bestselling author of Anna's Crossing"Kirkpatrick's vivid, rich prose will keep readers in awe and on the edges of their seats."--Publishers Weekly, starred review"Richly researched and remarkably detailed, Kirkpatrick's novel embodies a true pioneering spirit in its dramatization of gumption, poetry, and loss."--Booklist, starred review