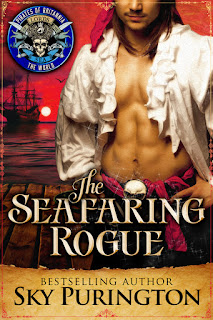 Left for dead on the shores of Scotland, Fraser MacLomain falls in love with the healer who saves him. Yet Elspeth MacLauchlin has deep dark secrets. Hidden truths rooted in a century old family feud. A vendetta that is soon resurrected by vicious enemies who steal her away during a late night pirate attack.

Bent on saving her and reaping revenge, Fraser embraces a life of piracy. Cutthroat, out for blood, he relentlessly pursues his nemesis long after rumor has Elspeth dead. Long after he abandons love for bitterness. But even a hardened heart can be thawed, as he soon discovers when catching his foe begins a high seas adventure ripe with passion, intrigue, and treasure.

“The plaid looks good,” she remarked, eying Fraser with appreciation.
She had worked tirelessly to mend his ripped and tattered MacLomain tartan. Now he wore nothing but the plaid wrapped around his waist and over his shoulder. Another means to test her, she was sure. Because there was no finer sight than Fraser dressed as he was with his chiseled muscles bared to the world.
“I think he enjoys his vanity fed,” Innis muttered as he grinned and rolled his eyes at the hill behind them. A hill that had hosted many a lass over the past few hours. Lasses, quite assuredly, out for a late-afternoon stroll to enjoy the view. And though they would claim otherwise, that view had nothing to do with the lovely bay.
Even Audric was aware of the women, his cheeks turning red when he dared a random peek over his shoulder.
“Well, I would see Fraser’s vanity challenged,” Elspeth murmured, not speaking of his good looks as she picked up one of several swords Innis had brought down. One suited to her size. She met Fraser’s eyes in challenge. “Do ye accept, then?”
His brows perked in interest. “Ye know how to fight?”
“Of course,” she replied, wide-eyed. “’Twould be foolish in these tryin’ times not to, aye?”
“I suppose ‘twould,” he concurred, a new spark in his eyes. One, she realized, born of a man who appreciated a woman who knew how to defend herself.
“So will ye then?” She made a show of testing the weight of the blade and even executed a few novice swings to prove she was good but not that good.
When a small smirk hovered on his lips, and his eyes narrowed on her grip, she knew he had her figured out.
“’Tis a good enough method making your opponent think ye cocky rather than talented,” he acknowledged. “But you’ll want to work some on your expression.”
“My expression?”
“Aye, ‘tis that of one with confidence, not insecurity.” He stepped close and brushed the pad of his weapon-roughened thumb between her brows. “It should furrow here as though ye are concentrating verra hard indeed.” Then he grazed it along her lips. “These should be turned down and mayhap wobble a wee bit as ye begin to doubt yourself. As if ye just realized ye took on more than ye can handle facing off with your particular enemy.”
After that, he dusted the outer edge of her brow indicating her eyes. “And these, of course, are your best weapon if you’re fighting a lad. Use them to look him over as if sizing him up.” A knowing gleam lit his eyes. “A look as if you’re trying to determine his weaknesses but realize mayhap there’s something to be attracted to instead.”
“I willnae do that,” she rebuffed, chuckling despite herself. “’Tis foolish.”
“I dinnae know.” Innis stroked the braids in his beard as he contemplated Elspeth. “I think Fraser is right. Especially when it comes to ye.”
“’Twill make me seem daft!” she retaliated.
“’Twill make ye seem as your rival likely expects ye to be,” Fraser counseled, still close enough that she could feel his heat. “A lass with a proper eye to pleasing a lad instead of a disobedient hellion trying to be something she’s not.”
When she narrowed her eyes, he merely shrugged and grinned. “I didnae say I agree with that mindset.” He stepped back and held his sword at arm’s length. “I’m more the sort that enjoys a wee lassie with a bit of backbone.”
“Good then.” She straightened said backbone and held her blade at the ready, wishing she wore trousers instead of a skirt.
They eyed one another and circled before she came at him fast. When he dodged, she spun quickly, came in low only for him to leap back with a grin of approval.
“Ye use your size to your advantage,” he praised. “And keep your movements quick but small.”
“Aye.” She ducked beneath the swing of his blade. “Douglas always said to conserve my energy. Especially when fighting a seasoned warrior.”
Innis guffawed. “Well, you’re certainly fighting such now, lassie!”
“Your brother’s words were wise,” Fraser conceded as they continued battling. While she knew he was holding back some, she could tell by his random nods of approval that it wasn’t as much as he thought it would be.
Yet as they continued crossing swords, she saw something shift in his eyes moments before he came at her a little harder. While she initially thought he was competitive and could not help himself, she soon realized it was for another reason altogether.
He truly cared about her well-being and wanted her to fight the best she could.
So as they fought and her energy waned, he offered not only praise where it was due but pointed out her every weakness. An elbow held too high on a swing. The incorrect angle of her knee when lunging. Breathing too heavily when she should be trying to measure her breaths for certain movements and speed. His was a well-balanced dance. A very specific manipulation of the body that included a mixture of thought out planning and spontaneity.
By the time they were finished, she was sore in places she had never felt pain.
“Thank ye,” she managed, as she tossed aside her blade, planted her hands on her knees and tried to catch her breath. “I will be feeling this for days, I imagine.”
“’Tis good.” He smiled. “’Twill give ye a better idea of what needs strengthening.”


Though not a lewd look by any means, as their eyes held, she got the strongest impression he longed to test other muscles as well. To see how limber she really was.

Sky Purington is the bestselling author of nearly forty novels and novellas. A New Englander born and bred who recently moved to Virginia, Sky was raised hearing stories of folklore, myth, and legend. When combined with a love for history, romance, and time-travel, elements from the stories of her youth found release in her books.


My review;
Author Sky Purlington has done it again! I am in love with each and derful mixture of love,everyone of her characters and their stories. How could anyone not love a pirate? This book is part of the series called  The MacLomain series. Each book gets better and better. I find myself checking all the time to see if any new books have come out by this author and I have never been disappointed. A wonderful mixture of love and secrets. I wish I could give this more  than 5/5. I was given this book for a review and all opinions are mine. 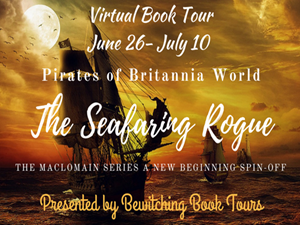