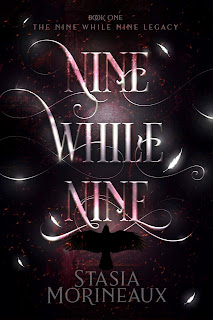 Tagline: Something Dark Is On Its Way

Isabeau Finne’s perfect world utterly unravels when she meets Death's right-hand man one fateful night, spiraling her life into a world of chaos and the impossible.

Suddenly, she is no longer Isabeau and becomes part of the most secretive inner-workings of Death itself, as well as an otherworldly dominion of ancient magic.

Now beings—which we were taught as children were merely fictional creations of wildly whimsical minds—are edging their way into her world as well.

She yearns for the simplicity of her old life—this one is full of dangers, unanswered questions, and cryptic dreams.

After one particularly anomalous dream in which she learns of the Nine While Nine Legacy, things become truly precarious.

Now, someone sees her as a risk…a threat…and wants to eliminate her.

Fortunately, she falls under the protection of Gideon—unless she leaves his territory—which is the one thing she wants the most…and wants the least.

Nine While Nine is a dark urban/contemporary fantasy—a modern dark faerie tale—replete with dark adventure, mysticism, a romantic sub-plot, light horror, world-building, and a new mythology. Isabeau is a seemingly ordinary young woman, living in modern-day suburbia. Until she discovers who she truly is: A Sióg O'Cailleach. A witch of the Fae.
Amazon

Excerpt:
“Who are you?” Isabeau breathed out.
His answer was to seal her lips with his after softly uttering a brief litany of words she didn’t understand. It was a kiss to last him, in all probability, for the rest of his life. Once the Comhairle learned of his indiscretion, he would be removed from her life. He should know better. He should be stronger, but she was his undoing. He had watched from the edge for too long, without ever uttering a single word to her, deprived of a single touch—always separated by the ethereal stratum between their existences or by a crowd.
It was a kiss that ripped through his soul and bound her to him in ways that no laws of his kind could ever conceive, bound them in ways beyond his expectations and understanding, and it staggered him.
It was a kiss designed not just to appease him, but to make her forget what she’d seen and felt. A kiss to forget him, because she could not know he existed.

Stasia Morineaux grew up in Southern California, pursuing faeries in the garden and seeking spirits in the local graveyard with her cat Bartleby; they also spent countless nights hunting down things that went bump!

She now resides in Asheville, North Carolina with her hubster and kidlet, as well as with a bevy of creatures…both real and “imaginary”.

In her spare time she likes to relax on her balcony, feet kicked up, listening to the squirrels arguing with the crows in her woods.

10 Lucky winners will get an eBook of Nine While Nine

There is a GRAND PRIZE too!

A signed, personalized paperback of NINE WHILE NINE and a Deluxe Mystery Box ($100 value) filled with NINE WHILE NINE inspired goodies from Hemlock and Blackthorn House (Incense, Candles, Bath Soaks, Oils, Teas, and much more!)