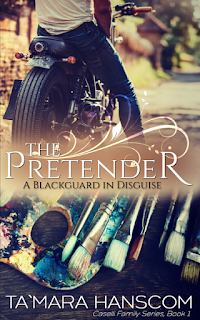 The Pretender: A Blackguard in Disguise (Reata Publishing, September 2017)
Set in South Dakota in 1975, where eighteen-year-olds could order 3.2 beer in a bar, and loaded guns were kept under the counter.
Frankie Valli sang “My Eyes Adored You,” and American soldiers returning from Vietnam struggled with their new reality.
It’s within this tumultuous season of American history that Tillie Caselli meets Noah Hansen, and they are never the same again.
​
Learn more and purchase a copy.


Despite just meeting each other, Tillie and Noah's lives have been mysteriously intertwined for many years in Ta'Mara Hanscom's The Pretender. From the moment they met, Tillie and Noah wanted to spend the rest of their lives together, but a deliberate omission will keep them apart-and that same omission will be responsible for the escape of a murderer, and a bride's deception.

Join Ta'Mara in celebrating the release of the second printing and new covers by entering to win her $75 prize basket giveaway!

Enter today by clicking the icon below, but hurry! The giveaway ends on October 11. The winner will be announced October 12 on the Litfuse blog.

Born and raised in South Dakota, Ta`Mara loves to write about the Great Plains and the beauty and people of Italia. While her husband and children manage their two pizza ristoranti, Ta`Mara works full time on The Caselli Family Series, and ministers to women. It is Ta`Mara s prayer that as the readers explore the truths in these volumes, they will come away with a new perspective on love, forgiveness, obedience, and God's plan for marriage

"The Pretender" is Book 1 in the Caselli Family Series by author Ta'Mara Hansom. Tillie Caselli is a young woman when she meets Noah Hansen. They fall in love and want to marry, but things happen that are beyond their control and it changes their lives. Will they ever get together or will they be forever apart? Who is at fault for keeping them away from each other?  Why?
I really enjoyed this story but, I also was sad for them. Sometimes others really need to stay out of other peoples lives even if they think it is for their own good.  I give this book a 4/5. I was given this book for a review by Litfuse Publicity Company and these are my opinions.
Posted by 3 Partners in Shopping at 11:48 PM