A CHANCE TO LOVE A HIGHLANDER BY S.R. MITCHELL BLITZ AND EXCERPT 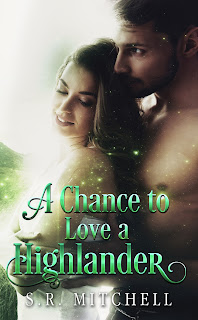 Elle was nothing like her sweet sister Anna and she never really expected to be. She enjoys what men can do for her.

She'd screwed up big time when she'd accidentally caused her sisters fall into the waters overboard, but at the same time it began their greatest adventure.

When Elle finds herself in the ghostly way--dead-- everything is put into perspective, but that will not change the feelings she has grown for one man even though she believes him forever lost to her.

Elle and Mikel have more in common than she realized.

They are both in for a surprise of epic proportions and only time will write their ending... 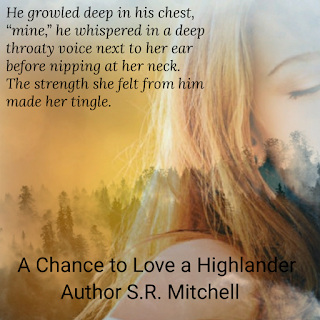 Elle couldn’t sleep. She tossed and turned, which only got her tangled up in the bedding. Between thinking about the fight and then the kiss, her brain wouldn’t shut off. It was filled with Mikel and worry about what to do.

He wanted her, but he was holding back, and it infuriated her. He knew she wanted him.

But how could she explain everything to him? This was a different time. He would think she was crazy or worse. Being a ghost was nothing she wanted to experience again anytime soon, but she’d made the stupid mistake of bearing all her emotions to Mikel.

Elle sighed and untangled the bedding from her body. She paced the room but couldn’t stop her mind from wandering back to Mikel. Maybe she’d go down to the kitchens and find something to munch on. She didn’t eat much before bed, and now she was hungry. She quickly dressed and snuck from her room. The castle at night was a tad creepy, and Elle found herself wandering around in the darkness, but she knew the corridors like the back of her hand. In an odd way, it was comforting to roam as she’d done in the past. She’d been able to explore at her leisure without ever being noticed.

Mikel watched her run the small ball of soap Anna had made her over her beautifully soft skin. The scent of flowers wafted into the air, adding another level of appeal.

He couldn’t pull his eyes from her. She was stunning.

Her wet skin did nothing to quail the rising temperature in his blood that caused his loins to twitch with need. The need to touch her, feel her, kiss her.

The bath had been brought up not long before he’d come in with the idea to join her. Steam from the boiled water wafted around Elle, adding to her lure, enticing Mikel closer without realizing his feet were moving.

She turned then, their eyes meeting, and a smile broke across her face, making his heart ache along with his body with need for her. He loved this woman with all his heart, and he would never grow tired of showing how much he loved her. He would cherish her body and soul.

“I wanted to wait for you, but the water was so nice and hot.” Elle giggled, sitting up slightly in the water so the tops of her breasts hovered above the water, giving him a tantalizing view. She knew exactly what she was doing as she continued to run the soap over her skin. Her eyes dropped to his tented kilt and she expelled the sensual sound of an excited and content woman. “Are you coming in to join me, or are you just going to stand there and watch me? This water will not stay nice and hot forever.”

Mikel smiled devilishly. He quickly removed his kilt and shirt before joining her in the hot water. He’d thought it ridiculous when his oldest brother Connor had the tub made, but now he was glad. It was plenty large enough for two. Her hands began to roam over his body with the soap as she pretended to wash him, every inch of him, but he knew what she was doing, and she’d pay for it shortly. He turned so they faced each other and realized he would never tire of this. He was content, and he could see in her eyes all the emotions she held in her heart, knowing she felt the same way.

“I missed you today,” she said quietly as she tossed the soap onto the floor. She ran her hands up his strong thighs as she leaned in to press a kiss to his lips. He growled deep in his chest. “Mine,” he whispered in a deep, throaty voice next to her ear before nipping at her neck. The strength she felt from him made her tingle. This was where she wanted to be. This was her home. She longed for this every night. She let her hands slide over his body, revelling in the feel of him. She loved how her touch turned him on so quickly.

Mikel hissed as she caressed him and threatened to undo him. “Lass,” he moaned as she gripped him tightly.

His hand found her heat and she moaned in return. They lavished each other’s body with attention. His blood pounded in his ears as her delicate hand found his hard flesh again and guided him to where she wanted him most.

He was all too happy to oblige. 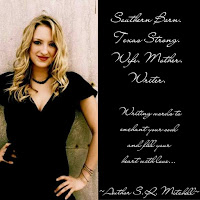 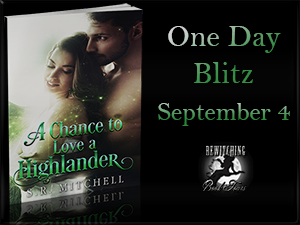