Love With a Scottish Outlaw by Gayle Callen Virtual Tourn Excerpt, and Giveaway

All she does know? She’s starting to fall in love with him. 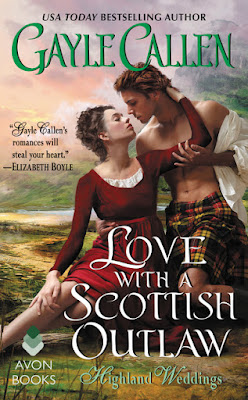 Catriona Duff can’t remember who she is. Discovered in the midst of a raging thunderstorm, she has no recollection of how she came to be there or how the guards around her ended up dead. She certainly doesn’t remember that the handsome Highlander who saves her is her family’s sworn enemy. All she does know? She’s starting to fall in love with him.

Duncan Carlyle couldn’t believe his luck when he found Catriona, the daughter of the man who made him an outlaw and forced him from his ancestral home, stranded on the road with nothing to her name--including her memory. Speaking out against Aberfoyle’s evil practices of stealing poor and orphaned children to sell to the highest bidder has cost him everything, but now he has the opportunity to make the man understand the true price of a missing child. But as Duncan begins to know Cat, guilt over his actions wars with his irrepressible desire for her.

When Cat discovers the truth of her identity, she decides she can teach the outlawed clan chief a lesson, but in love, there’s more than one way to win.

Excerpt
Duncan lifted the woman’s upper body into his left arm, cradling her head so that he blocked the rain. He probed near her wound gingerly with his right hand, and she frowned and weakly tried to turn away.
His wariness deepened. There was something about her, a familiarity that echoed inside his head but refused to take shape.
“Where am I?” she whispered, her accent English. “What happened?”
An English lady in the Highlands? He chose to answer the second question rather than the first. “Ye’ve a nasty wound to your head, mistress. Did ye fall?”
She blinked as if she might lose consciousness. “Where am I? What happened?”
Now it was his turn to blink, but he remembered that wounds of the head could cause confusion. He knew he had to stop the blood loss.
“Mistress, can ye stand?”
She opened those eyes again, large and golden, in a delicate face. Her dark hair streamed back from her forehead, her hairline coming to a peak.
He recognized her, a flash of memory from Stirling several years ago, when he’d glared his hatred at the Earl of Aberfoyle, a haughty old man on horseback, forcing aside a poor lass heavy with child to make way for him. The earl’s family was seldom in Scotland, so their arrival in the Highlands had caused a stir. Duncan had seen this woman riding just behind, wearing the fine gown and jaunty hat that marked her a noble lady. At least she’d looked distressed at her father’s actions.
Catriona Duff was the daughter of Aberfoyle, the chief of the Clan Duff and Duncan’s bitter enemy. Aberfoyle was one of the main reasons that Duncan was an outlaw who had to protect and feed his people while on the run.
He lifted his head and looked about, as if the earl and his entire retinue were somewhere nearby, waiting to attack him. “Where are your men?” he demanded.
“What happened?” she asked weakly.
“Ye’ve hit your head. Where are your men?”
“My—men?”
Her hand fluttered toward her forehead, but he didn’t allow her to touch the wound.
A spasm of pain narrowed her eyes. “I found them . . . dead,” she whispered. “What happened to me?”
“I don’t know.” Six weeks after almost being captured, he was still wary of anything unusual in his part of the Highlands. Dead men would prove her story true, but he couldn’t deal with them now.
“I—I can’t remember—I can’t remember anything!” Though her cry was feeble, it was full of helplessness and fear.
“Ye don’t remember the accident?”
“Not . . . the accident, not even . . . my name.”
He frowned down at her, wondering at what intrigue she was playing—or what her father had set in motion. He wouldn’t put it past the bastard.
She clutched his plaid. “What happened to me?” she cried in despair.
“I do not ken. I must clean that wound. Can ye stand? I can pull ye up on my horse.”
He rose, lifting her up with him until she could clutch the saddle for support. After mounting, he reached down for her. He would have preferred she ride astride behind him, but she seemed so weak that he ended up cradling her across his thighs. She leaned into him, her head lolling onto his chest, her blood staining his black, red, and yellow plaid.
It didn’t take long to reach the rocky overhang he’d used for shelter several other times. Once out of the rain, he searched his saddle pack but found nothing that would do for a clean bandage. He ended up cutting several strips from the end of his shirt with his dirk. The wound seemed clean enough after all the rain, so he wrapped the improvised bandages around her head and hoped they stopped the bleeding.
She looked at him helplessly the whole time, and he felt like she was memorizing his features. He studied her, too. Her high cheekbones emphasized the hollows beneath, and her full lips hinted at an expressive mouth. Her pale face was as remote and beautiful as a statue, making her appeal to him on a primitive level that he would never acknowledge.
Why was she in the remote Highlands? According to gossip he’d heard long ago, she rarely visited her father’s castles. Was she the advance of a larger party headed right for Duncan’s unsuspecting people? She was so close to his hidden encampment. If he let her go, she could bring men to hunt the area, risking his people—risking the good he was trying to do. He couldn’t release her until he knew all the facts. 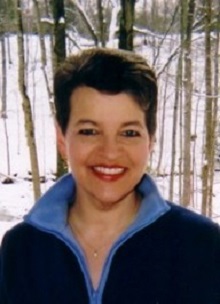 After a detour through fitness instructing and computer programming, Gayle Callen found the life she’d always dreamed of as a romance writer. This USA Today bestselling author has written more than twenty historical romances for Avon Books, and her novels have won the Holt Medallion, the Laurel Wreath Award, the Booksellers’ Best Award, and been translated into eleven different languages. The mother of three grown children, an avid crafter, singer, and outdoor enthusiast, Gayle lives in Central New York with her dog Uma and her husband, Jim the Romance Hero. She also writes contemporary romances as Emma Cane. Discover more at her website.