The Survivor by DiAnn Mills A Book Review 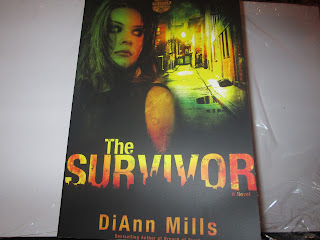 The Survivor by DiAnn Mills is a story with  non-stop suspense with a bit of romance thrown in. Dr. Amy Garrett is a woman who survived a horrible attack when she was a child. She has lived with the knowledge that the crime has never been solved. She finds herself wanting to tell her story in a book, and she meets Kariss Walker to talk about writing a book about her experience.  Kariss Walker is a well known suspense author and Dr. Garrett wants her to write the story for her.  The problem is that Kariss is an author who always seems to sense and find trouble.
Kariss used to be in a relationship with Special Agent Tigo Harris and he was the person she went to when she needed advice on her writing. Even though she really wants to ask him for advice, like she has in the past, she is unable to because a few months ago she felt that she had to break up with him.  It was not something that she wanted to but felt that it had to be done to protect herself from being hurt again.  Tigo and Kariss go on with their lives both missing each other. Even though Kariss is the one that has broken up with Tigo, and even though he understands why they are apart he still wants to get their relationship back. Tigo is now in the midst of trying to find a killer who has carried out a car bombing.
The more that Kariss writes Dr. Garrett's story the deeper Kariss falls into danger. Tigo has do all he can to keep the woman he still loves from the danger that is getting closer and closer. Who wants Kariss dead for writing about Dr. Garrett's childhood attack? Who cares enough to stop an unsolved case from being solved?
I really was very engrossed in this book from the moment I started to read it. There were many stories going on all at once but were deeply intertwined. First, the story of a young haunted by her past. There is also a couple trying to find their way back to each other while trying to keep the woman from getting killed. Then there is the story of an unsolved crime waiting to be solved. I really enjoyed this book from cover to cover. I was given this book for free from http://wwwBooksneeze.com  for the purpose of a review but all opinions are 100% my own.
Posted by 3 Partners in Shopping at 10:52 PM