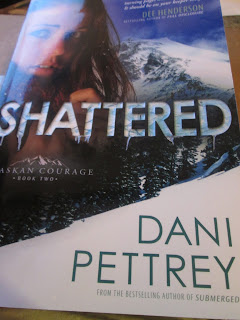 I was very excited to read Shattered by Dani Pettrey. I had heard a lot about this book and I was interested to see what it was about.  Piper Mckenna lives in Yancy, Alaska with her sister Kayden. One night they are awakened by Piper's dog Aurora letting them know that there was someone in their house. They quietly moved down the stairs where Piper turned on the switch. Neither one of them was prepared for what they saw. Piper's brother Reef was standing there with blood all over him! When Piper tries to convince him to let her get their  brother Cole for help Reef would not let her, believing that no one would believe that
when he found the woman she was already dead.  Deputy Landon Grainger has loved the Mckennas like they were family, especially Piper, but he has to do his job. Landon's sheriff has decided that he wants this investigation over and done with as soon as possible. The problem is that the the evidence points to Reef.

Piper realizes that she if she wants her brother to be cleared of this murder then she will have to do it herself. Landon in turn, knows that it will be up to him to protect Piper from the danger that she is putting herself in. With every move they make they are getting deeper and deeper into danger. As they are working closer and closer they are finally allowing their love for each other to come out. It was a great story that had the suspense of what was going to happen to Reef , but also what was going to happen to Landon and Piper's future, if anything. This was a suspense story that was a real page turner. I also loved the romance part of the story. This book is Book Two in the Alaskan Courage series. I was not able to read the first in the series Submerged, but it was not necessary because the book stands alone. If anyone is interested there is another in this series coming out soon and I am sure you will love it!

I would give this book a 5/5. I loved all parts of the story. I was given this book free by
Bethany House for a review. All opinions are 100% my own.
Posted by 3 Partners in Shopping at 3:09 PM