Beyond the Moon by R. J. Wood Cover Reveal and Giveaway

Today is the cover reveal for Beyond the Moon by R.J. Wood! This cover reveal is organized by Lola's Blog Tours. 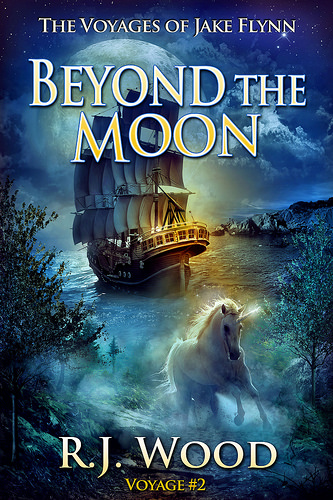 Blurb:
Beyond the Moon picks up after the battle above the ice planet Nystal, where Earth-kid Jake Flynn and crew have recently escaped from the Crimson Cabal. Their voyages continue on the other side of the galaxy where magic has displaced technology and monsters are real. Jake continues to grow in his new abilities to channel energy and fly tall wooden ships in space, but struggles with having been named the Justicar, a prophesied champion of the light. Pushing forward, he sets course for new planets in search of allies who will stand with him and help stop the cabal from resurrecting a long dead queen. To succeed, Jake must learn more about channeling and how to balance his new and unwelcome responsibilities with the continued search for his missing parents and a way home to Earth.

Unicorns, ghost ships, pirates, space battles, magi wielding lightning and fire, dinosaurs, and a Valkyrie â€“ Jake must face them all in this epic sword and space adventure. By the end, Jake will take another step toward adulthood, discover truths about his parents' fate, suffer the death of a comrade, and muster the courage to charge into a final showdown with the terrifying snake-woman, Celia Sable.


Check out Destiny's Gambit (The Voyages of Jake Flynn #1)! 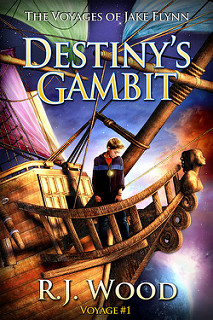 A resourceful boy takes a glowing sailboat across the stars to search for his long-missing parents and becomes the target of pirates and an evil cabal with a sinister agenda.

About the Author:
R. J. Wood has been creating stories and adventures for others since 1979. A bard at heart, he trained in Drama (BA) and History (MA) while at university. He currently lives near Snoqualmie Falls in Washington State with his wife and children. There he does a little fishing, some adventuring, and of course, his writing.

Like everyone of my generation and beyond I have been heavily influenced by film. I like to think of my books as movies in my mind. I developed my creative writing through fantasy, science fiction, and paranormal RPGs. My degree in drama helps me with story, characters, and especially dialogue. Having an advanced history degree is excellent for plots and characters, but it also helps me with world building.

Giveaway
There is a cover reveal wide giveaway for the cover reveal of Beyond the Moon. One winner will win a $10 Amazon Gift card.