True To You by Becky Wade Book Tour and Book Review 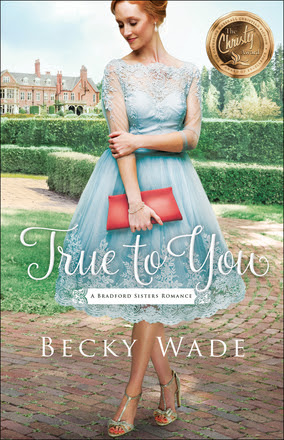 After a devastating heartbreak three years ago, genealogist and historical village owner Nora Bradford decided that burying her nose in her work and her books is far safer than romance in the here and now.

Unlike Nora, former Navy SEAL John Lawson is a modern-day man, usually 100 percent focused on the present. However, when John, an adoptee, is diagnosed with an inherited condition, he's forced to dig into the secrets of his ancestry.

John enlists Nora's help to uncover the identity of his birth mother, and as they work side by side, this pair of opposites begins to suspect that they just might be a perfect match. But can their hope for a future survive their wounds from the past?  He has asked Nora to help him find his mother.

"The author is an exceptional storyteller. She writes with wisdom, creativity and the skill of a seasoned writer. The Bradford sisters have a close and likable bond, and the author drives the reader deep into their hearts, hopes and dreams. She captivates the reader's attention and holds their interest from the first chapter to the end."
RT Book Reviews

"Wade starts this new series off strong, introducing characters that are easy to invest in."
Publishers Weekly

Author Becky Wade has done it again. She always writes a beautiful story and "True To You" is one of her best.   Nora Bradford owns a village and she has decided that she does not want any romance ever again. She has been deeply hurt and does not want to go through this ever again. John Lawson is an ex Navy SEAL. He finds out that he has a condition and because he was adopted he needs help to find out his lineage. They are opposites but will opposites attract in this case like others? Will they have enough courage to see if they might have a future? I give this book a 5/5. I was given this book for a review by Bethany House Publishers and all opinions are mine.
Posted by 3 Partners in Shopping at 11:12 PM