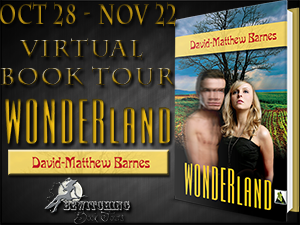 
After her mother loses her battle to cancer, fifteen-year-old Destiny Moore moves from Chicago to Avalon Cove, a mysterious island in South Carolina. There, she starts a new life working part-time as a magician's assistant and living with her eccentric uncle Fred and his hottie husband, Clark.


Destiny is soon befriended by two outcasts, Tasha Gordon and Topher McGentry. She accepts their invitation to accompany them to a place called Wonderland, a former boarding house owned by the enigmatic Adrianna Marveaux.


It's there that Destiny meets and falls in love with Dominic, Tasha becomes enamored with Juliet, and Topher gives his heart to Pablo.


When Destiny uncovers the reason she and her friends have really been brought to Wonderland, she's faced with the most crucial choice of her life.


David-Matthew Barnes is a filmmaker, novelist, playwright, poet, and teacher.


He is the award-winning author of nine novels including the young adult novels Swimming to Chicago and Wonderland, which were nominated by the American Library Association for their annual Rainbow Books, a list of quality books with significant and authentic GLBTQ content for children and teens. His literary work has appeared in over one hundred publications including The Best Stage Scenes, The Comstock Review, and The Southeast Review. He was selected by Kent State University as the national winner of the Hart Crane Memorial Poetry Award. In addition, he's received the Carrie McCray Literary Award, the Slam Boston Award for Best Play, and earned double awards for poetry and playwriting in the World AIDS Day Writing Contest.


Barnes is also the author of over forty stage plays that have been performed in three languages in eight countries. He is a member of the Dramatists Guild of America and International Thriller Writers.


Barnes' first film was Frozen Stars, which he wrote and directed while still an undergrad in college. The coming-of-age independent film stars Lana Parrilla of ABC's Once Upon a Time.


Barnes earned a Master of Fine Arts in creative writing at Queens University of Charlotte in North Carolina. He has taught college courses in writing and the arts for the last decade.


He lives in the city of Denver where he serves as the CEO of Fairground CineFilms.