A Western Romance Novella (Book 4, Burnett Brides Series)Eugenia Burnett has gotten what she wants. Her three sons are married and she has three grandchildren, with the fourth on the way. But she hasn’t given up her matchmaking ways. Now she’s moved on to the people she knows and she’s matching widows and widowers together. Until one widower, Wyatt Jones let’s her know in front of a crowded restaurant that he’s not interested in any of the women she keeps sending him except her. Sworn never to remarry, she doesn’t need a husband or want one. She’s a free spirit doing what she pleases and no one is going to boss her around. But Wyatt wants Eugenia and she says no. In this western historical romance novella, come back to the old west and spend Christmas with the Burnett family. See Eugenia meet her match in cowboy Wyatt Jones. 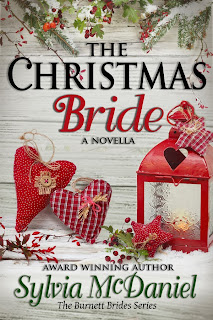 The Christmas Bride By Sylvia McDaniel The door to the café opened, the cold wind slamming it against the wall. The restaurant grew quiet with the sudden entrance, and Eugenia turned to see who was making such a racket. Wyatt Jones stood in the doorway, his muscular frame filling the opening. His cowboy hat sat at an angle on top of his head, and his large brown eyes scanned the room. In his hand, he carried a duffle bag. Eugenia tried to ignore the big man as he strolled through the doorway and removed his Stetson. Their gazes locked across the room, and he smiled, his full lips turning up in a grin that made her body soften and her heart give an extra little ca-thunk. He spoke to the waitress, but his gaze never wavered from Eugenia. Uh-oh. A tingle of nerves zinged through her bones. This couldn’t be good. His boots made a rhythmic thump, thump, thump on the wooden floor as he walked with a determined stride straight toward her, his bag in hand, his spurs jingling. Nervously, she licked her lips. Myrtle’s back faced the door, and she continued to blather about something. But Eugenia couldn’t seem to focus on the words. All she could see was this handsome cowboy walking her way. She couldn’t stop staring at him. She knew he was coming for her. She’d already sent several women his way, and she didn’t think he was here to thank her for curing his loneliness. Wyatt stopped at their table, touching the rim of his hat as he glanced at Myrtle. “Morning Mrs. Sanders. Nice to see you.” He pivoted to Eugenia, his brown eyes dancing with merriment. Staring into those earthy eyes, a warm flush settled over her like a blanket. He opened the bag, withdrew a casserole dish, and laid it on the table. He took a second dish out and placed it alongside the first one, and then another, and another. Oh dear. When he finished, six clean, empty casserole dishes sat in front of her. His mouth turned up in that slow, lazy grin that burned a sizzle along her spine. Why did this man make her feel like she’d raced her grandchildren around the yard and couldn’t catch her breath? Why did this man make her more nervous than a virgin on her wedding day? Why did this man have her wondering how his lips would feel against her own? “Eugenia,” he said in that deep drawl that sent shivers skittering over her. “You’ve been mighty busy, sending women out to my house. You’ve kept me and my men well fed the last couple of weeks.” “Glad I could help,” she said, her voice sounding breathy and soft. He leaned in close and put his hands on either side of her, effectively pinning her in the chair. She felt the urge to jump up and run, but resisted. She sat there, stared him in the eye and refused to back down. No longer would she back down to any man. Never again. “While I appreciate the effort, I’m not taking the bait. There’s only one woman in this town that I’m interested in pursuing to become my wife.” The deep timbre of his voice was low and commanding. “And pray tell, who would that be?” she asked, knowing she would have him hitched as soon as possible. “You, Eugenia Burnett. You.” 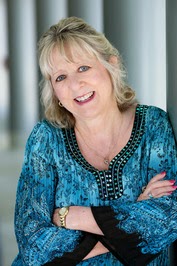 Sylvia McDaniel is a best-selling, award-winning author of historical romance and contemporary romance novels. Known for her sweet, funny, family-oriented romances, Sylvia is the author of The Burnett Brides a western historical western series, The Cuvier Widows, a Louisiana historical series, and several short contemporary romances. Former President of the Dallas Area Romance Authors, a member of the Romance Writers of America®, and a member of Novelists Inc, her novel, A Hero’s Heart was a 1996 Golden Heart Finalist. Several other books have placed or won in the San Antonio Romance Authors Contest, LERA Contest, and she was a Golden Network Finalist. Married for nearly twenty years to her best friend, they have two dachshunds that are beyond spoiled and a good-looking, grown son who thinks there’s no place like home. She loves gardening, shopping, knitting and football (Cowboys and Bronco’s fan), but not necessarily in that order. Currently she’s written sixteen novels and is hard at work on number seventeen. Look for her the first Tuesday of every month at the Plotting Princesses blogspot
http://plottingprincesses.blogspot.com/.

Be sure to sign up for her newsletter to learn about new releases, contests and every month a new subscriber is entered into a drawing for a free book. http://www.SylviaMcDaniel.com


Giveaway: 2 ebook copies (one to each winner) of The Christmas Bride