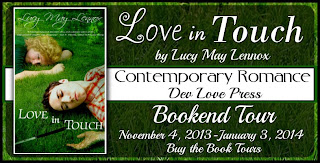 Kassie has felt adrift ever since her dad died when she was in college. Now 24 and living in Seattle, she gets interested in learning sign language through her roommate, a sign language interpreter. One day at a Deaf community event, she sees a young man sitting off by himself. Kassie feels compelled to try signing to him–the fact that he’s strikingly handsome doesn’t hurt.

Jake has been deaf and blind since birth. His disability has cut him off from the world, but beneath his isolated exterior, is a smart, sweet guy with a dry sense of humor. Despite the odds, he’s highly educated, but at 26, he’s gotten stuck in a rut, with few friends and no clear career plans. Until a sweet-smelling girl introduces herself to him unexpectedly, and opens up a whole new world to him.
Jake is more intelligent, more genuine than anyone she has met before, and for the first time Kassie starts to feel like her life has some direction. But as their friendship deepens into something more, the difficulty in communicating with each other only grows, and it seems like everyone they know thinks their relationship won’t work. How can they come to a deeper understanding of each other, and find a future together?


At the same time, I always had a desire to "fix" bad stories: trite, boring plots, stereotypical characters, weak writing, unrealistic dialog. Some of the first writing I did as a kid was fixing my favorite sci fi TV shows to make the female characters more active, less like boring doormats. If the internet had existed back then I would have been a fan fiction writer for sure.


Besides passive female characters, the other thing that always bothered me was how poorly people with disabilities are portrayed in fiction. There are so many clichés: the bitter recluse, the blind guy dating a girl who has a scarred face, or who is hiding her real identity from him. It's so frustrating to come across these same hackneyed plots which have no connection to the real lives of people with disabilities whom I have known.


I realized that if the kinds of books I want to read are not out there, why not write them myself? I based the characters partly on people I have known, and did a lot of research to fill in the gaps. I wanted to show that guys with disabilities can be sexy, even when written realistically. You don't have to romanticize or cheat on the details. Real life is way more exciting to me than well-worn clichés.


What Inspired Me to Write My Book


I always loved reading from the time I was really small--there's nothing better than getting lost in a great story! The best part is when you stumble across some small truth: a story that makes you realize you're not alone, that other people have experienced or thought about the same things as you have. Even one sentence that makes me think, "Yeah! That's how it is!" will make a whole book worthwhile.
About the Author;
Lucy May Lennox is a lifelong resident of the beautiful Pacific Northwest. Her first ambition in life was to become a child actor, but when she grew too old to be an adorable prodigy, she turned to writing instead. A connoisseur of novels featuring men with physical disabilities, she grew frustrated with all the cliches, ignorance and stereotypes and decided to write her own positive take on disability. In addition to writing, Lucy also enjoys cooking and gardening, and is an amateur opera singer.

a Rafflecopter giveaway
Posted by 3 Partners in Shopping at 12:51 AM