No Good Duke Goes Unpunished The Third Rule of Scoundrels

He is the Killer Duke, accused of murdering Mara Lowe on the eve of her wedding. With no memory of that fateful night, Temple has reigned over the darkest of London’s corners for twelve years, wealthy and powerful, but beyond redemption. Until one night, Mara resurfaces, offering the one thing he’s dreamed of...absolution. A lady returned... Mara planned never to return to the world from which she’d run, but when her brother falls deep into debt at Temple’s exclusive casino, she has no choice but to offer Temple a trade that ends in her returning to society and proving to the world what only she knows...that he is no killer.  A scandal revealed...  It’s a fine trade, until Temple realizes that the lady-and her past-are more than they appear. It will take every bit of his strength to resist the pull of this mysterious, maddening woman who seems willing to risk everything for honor . . . and to keep from putting himself on the line for love 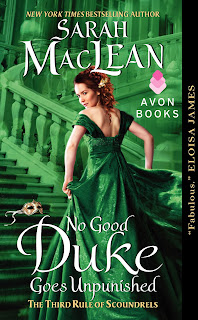 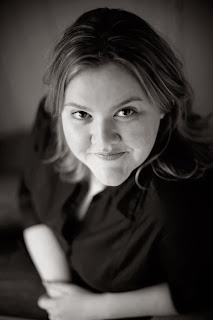 Author Info Sarah MacLean grew up in Rhode Island, obsessed with historical romance and bemoaning the fact that she was born far too late for her own season. Her love of all things historical helped to earn her degrees from Smith College and Harvard University before she finally set pen to paper and wrote her first book. Sarah now lives in New York City with her husband, their dog, and a ridiculously large collection of romance novels. She loves to hear from readers. Please visit her at www.macleanspace.com Author Links http://macleanspace.com/ https://www.facebook.com/sarahmaclean

Rafflecopter Giveaway (Copy of A ROUGE BY ANY OTHER NAME & ONE GOOD EARL DESERVES A LOVER, Book One and Two of the Rules of Scoundrels Series)