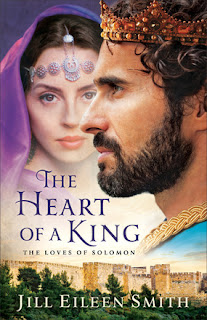 Get swept away by a story of love, loss, and longingKing Solomon could--and did--have anything he wanted, including many women from many lands. But for all of his wealth and wisdom, did he or the women he loved ever find what they were searching for?In this engrossing novel, find yourself whisked away to ancient Israel, where you'll meet four remarkable women: Naamah the desert princess, Abishag the shepherdess, Siti the daughter of a pharaoh, and Nicaula the queen of Sheba. As you experience the world of Solomon through his eyes and theirs, you'll grapple with whether this king's storied wisdom ultimately benefited him and those he loved . . . or betrayed them.Praise for the Daughters of the Promised Land Series"Smith infuses this well-known story with emotional depth and a modern sensibility not typically seen in historical novels."--Publishers Weekly on A Passionate Hope"[A] richly descriptive and dramatic novel."--Booklist on Redeeming Grace"Impeccable research and vivid prose."--Library Journal on The Crimson CordJill Eileen Smith is the bestselling and award-winning author of the biblical fiction series The Wives of King David, Wives of the Patriarchs, and Daughters of the Promised Land, as well as the nonfiction book When Life Doesn't Match Your Dreams. Her research into the lives of biblical women has taken her from the Bible to Israel, and she particularly enjoys learning how women lived in Old Testament times. Jill lives with her family in southeast Michigan. Learn more at www.jilleileensmith.com.

Praise for The Daughters of the Promised Land Series"Readers will appreciate that Smith infuses this well-known story with emotional depth and a modern sensibility not typically seen in historical novels."--Publishers Weekly on A Passionate Hope"A Passionate Hope is a wonderful novel rich with historical detail about real people who suffer the heartache that comes from stepping out ahead of God, and the miracle of grace that comes when we cry out to Him."--Francine Rivers, bestselling author of Redeeming Love, on A Passionate Hope"Smith's fresh retelling of the story of Ruth and Naomi portrays these strong biblical women in a thoughtful and reflective manner. Her impeccable research and richly detailed setting give readers a strong sense of life in ancient Israel."--Library Journal on Redeeming Grace"Smith has brought the story to life in this richly descriptive and dramatic novel, enhancing it with colorful details about life in ancient Moab and Israel, including the political and religious climates of the time."--Booklist on Redeeming Grace"This is both a well-drawn love story as well as the wistful imaginings of early Israel."--Publishers Weekly on The Prophetess"Rahab's story is one of the most moving redemption accounts in Scripture. The Crimson Cordperfectly captures all the drama of the original, fleshing out the characters with care and thought, and following the biblical account every step of the way. Jill's thorough research and love for God's Word are both evident, and her storytelling skills kept me reading late into the night. A beautiful tale, beautifully told!"--Liz Curtis Higgs, New York Times bestselling author of Mine Is the Night, on The Crimson Cord

Author Jill Eileen Smith has written another book in that wonderful series called , "Daughters of the Promised Land Series."  This book is called , " The Heart of a King". Who was King Solomon? Was he really rich? Was he even smart enough to know what to do with it all? How many women did he really love? He was able to have whatever he wanted.
This is the story of 4 women in his life.  The daughter of a pharoah named Siti,  a princess of the desert called Naamah, A shepherdess named Abishag and the queen of Sheba. They all were part of his life. This is a very gripping story. Anyone who loves ancient times where kings and queens were in charge will love this series. I give this 5/5. I was given this book for a review and all opinions are mine.